The overwhelming majority (82%) of UK CIOs, CTOs and IT managers predict that their use of SSD technology will increase over the next 12 months, according to new research from Kroll Ontrack. However, more than one in five (21%) of IT leaders polled said that they had returned or replaced an SSD drive in the past year, and of these, a third (30%) found that permanent data erasure from SSDs was more difficult than from traditional HDDs. 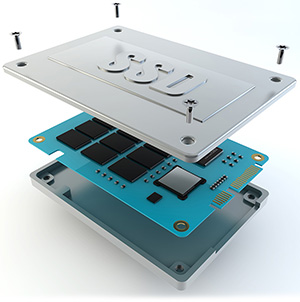 The main reason that they chose SSDs was their speed, according to Kroll Ontrack’s research, which found that 92% of CIOs, CTOs and IT managers bought them because they were faster than HDDs. Sixteen percent believed SSDs to be more reliable than HDDs, while 18% said that they chose SSDs simply because they like to work with leading edge technology.

Phil Bridge, managing director, Kroll Ontrack UK, said: “The predicted rise in adoption of SSDs over the next 12 months, together with the low levels of awareness about the relative difficulties of either restoring or erasing data from SSD technology, heralds massive problems for organisations in the years ahead. Our engineering team has noticed significant additional challenges when asked to restore or erase data from SSDs simply because of the proprietary design and architecture used by the hundreds of manufacturers that make them. In contrast to HDDs, there is no standard toolkit that can be used with SSDs, so organisations need to ensure that they work with a specialist provider that has the resources to develop the right tools for each one.”

Kroll Ontrack highlights the top five technical issues that make data recovery from SSDs much more complex and difficult than from traditional HDDs.

Proprietary design and architecture: The design of SSD is rapidly developing in the pursuit of higher performance, lower cost and higher capacity. For each new design, the layout of the data, the way it is configured and the way the data is accessed changes. Consequently, the data layout needs to be mapped for each new design before a recovery can be attempted.

Design does not prevent data loss: The data stored on SSDs is susceptible to corruption. When electrical power is removed from an SSD, whether it is planned or unplanned, the SSD has milliseconds to save the data into the right location. If the SSD is reading or writing data at the time the power is removed this is a complex task to achieve.

Encryption: Using hardware or software encryption can make the ability to recover data quickly significantly more challenging and SSDs are more frequently encrypted than normal HDDs. Maintaining up-to-date backups of your data is even more critical with encrypted drives to ensure a quick recovery.

Embedded SSDs: On most tablets and smartphones, the memory, controller and associated electronics are mounted on the same circuit board as all the other electronic components. This means fault isolation and repair are far more complex than from an SSD that can be removed.

Number of manufacturers: There are currently over 500 manufacturers and hence the number of different designs is huge.