The cyber crooks behind Cryptolocker, one of the latest ransomware threats, are having much success in infecting PC users with the deadly malware, but whether the victims fork over the money or not is still unknown.

According to Kaspersky Lab researchers, the malware’s encryption scheme has yet to be cracked and the question still is whether it can be.

“For each victim, it connects to its command-and-control (C2) to download an RSA public key that is used to encrypt the data. For each new victim, another unique key is created and only the Cryptolocker authors have access to the decryption keys,” explains expert Costin Raiu.

Victims are made aware that they have three days to pay up, otherwise the encryption key is destroyed, and their files are lost forever if they haven’t performed a back up: 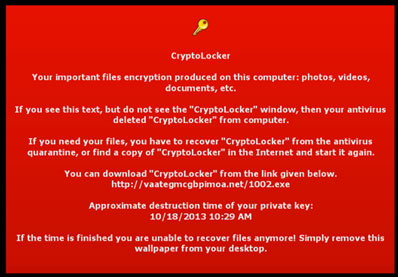 But the question that many researchers want answered is just how many users fall for the trap and end up saddled with Cryptolocker?

By using the malware’s domain generation algorithm which was reverse-engineered by ThreatTrack Security’s Dimiter Andonov, Kaspersky researchers have managed to sinkhole three domains that serve as C&C servers for the malware. They have discovered that in just four days, they have been contacted from 2764 unique victim IP addresses, mostly from the US, Great Britain, India and Canada.

But, they point out, if the victims react quickly, they can prevent the malware from encrypting the files.

“If your data has already been encrypted, the worst thing to do is to pay the bad guys. This will encourage them to expand and strengthen the attack techniques,” Raiu points out, adding that they best thing one can do to protect oneself from this threat is to keep their AV and host IPS solutions updated, and to back up regularly.