When it comes to Twitter, people still have a large appetite for having a large number of fake followers in order to seem more popular. Fraudsters are cashing in on this in a big way and even lowering prices to compete against each other. 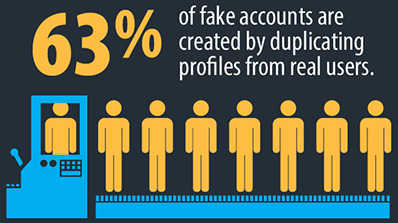 Barracuda released an infographic that highlights key stats about the state of fake accounts on Twitter and other attacker trends.

Duplicated profiles – 63% of Fake Accounts are created by duplicating profiles from real users. We cover this in more detail in this blog post from July.

Spamming using Twitter lists – Attackers add victims to a Twitter List to get their attention and then the list description advertises a spam URL. We have seen new spam accounts add over 90,000 people to a list within the first few hours of existing.