BitSight analyzed security ratings for over 70 Fortune 200 companies in four industries – energy, finance, retail and technology. The objective was to uncover quantifiable differences in security effectiveness and performance across industries from October 2012 through September 2013. 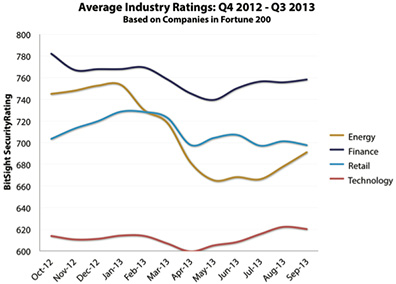 The study revealed that, in spite of all the attacks from criminals and hacktivists over the past year, the financial industry has performed well. In contrast, the technology industry falls far behind, pointing to a need for greater focus on cyber risk management in this sector.

Leveraging big data for observed security incidents, including communication with known command and control servers, spam propagation and malware distribution, BitSight SecurityRatings provide a perspective on risk from the outside-in. The ratings range from 250 to 900, with higher numbers equating to better security effectiveness. Factors used to determine ratings include the classification, frequency, and duration of observed security incidents.

“BitSight’s outside in, data driven approach to rating shows clear differences amongst industries,” said Stephen Boyer, BitSight co-founder and CTO. “By looking at evidence of compromise, we focus on outcomes rather than policies. Companies can have very similar policies, but their effectiveness can still vary widely. For example, the technology sector companies included in this analysis had significantly lower ratings than companies in the financial services sector. The spread is surprising.”

Technology companies are required to be compliant with the regulations of the industries they serve, including HIPAA, PCI DSS and FISMA. With this consideration, it is surprising that the technology sector measures dramatically lower than retail and finance. High profile breaches including Bit9 and Adobe may indicate why the technology industry rates less effective.

The Adobe data breach that also impacted Dun & Bradstreet and LexisNexis went unobserved for months before a third party researcher uncovered the incident. Initial reports suggest these breaches occurred as early as March 2013, yet were unreported until October 2013. The persistency of attacks and time to remediate are key contributors to low SecurityRatings in this industry.

In spite of frequent cyber attacks on financial institutions, the finance sector rated the most favorable in terms of security effectiveness. Along with the known tactics employed by cyber criminals, this sector was also hit with several politically motivated DDoS attacks.

One reason for the high SecurityRatings is that the companies assessed were quicker to respond to threats than their peers in other industries. Faster response time leads to less damage and loss. Due in part to the need to meet security and privacy regulations and the desire to stay out of news headlines for losing customer data, financial institutions tend to focus more executive level resources on IT security and risk management than other industries.

The energy sector, which includes utilities and oil and gas companies, rated highly in Q4 2012, but fell sharply in the first half of 2013 when faced with extensive malware and botnet attacks. Not only was there an increase in the number of security incidents in Q1 2013, but energy companies were slow to respond to these incidents. However, in the third quarter of 2013, the energy industry’s average effectiveness shows an upward trend, suggesting that they may be getting better at thwarting cyber attacks.

The retail sector, which excludes solely online retailers, also started out on an upward trend in Q4 2012, but then hit a rough patch in Q1 2013, showing that they continue to be an attractive target for cybercriminals seeking access to identity and financial information.

The retailers included in this study faced an increase in botnet, spam, phishing and malware attacks Q1 2013, and took longer to remediate attacks as their frequency increased. The SecurityRatings of this group have remained relatively flat in the past two quarters, leaving much room for improvement.