IOActive has uncovered multiple vulnerabilities in Belkin WeMo Home Automation devices that could affect over half a million users. Belkin’s WeMo uses Wi-Fi and the mobile Internet to control home electronics anywhere in the world directly from the users’ smartphone. 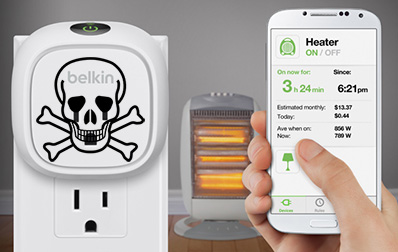 Davis said, “As we connect our homes to the Internet, it is increasingly important for Internet-of-Things device vendors to ensure that reasonable security methodologies are adopted early in product development cycles. This mitigates their customer’s exposure and reduces risk. Another concern is that the WeMo devices use motion sensors, which can be used by an attacker to remotely monitor occupancy within the home.”

The vulnerabilities found within the Belkin WeMo devices expose users to several potentially costly threats, from home fires with possible tragic consequences down to the simple waste of electricity. The reason for this is that, after attackers compromise the WeMo devices, they can be used to remotely turn attached devices on and off at any time. Given the number of WeMo devices in use, it is highly likely that many of the attached appliances and devices will be unattended, thus increasing the threat posed by these vulnerabilities.

Additionally, once an attacker has established a connection to a WeMo device within a victims network; the device can be used as a foothold to attack other devices such as laptops, mobile phones, and attached network file storage.

The Belkin WeMo firmware images that are used to update the devices are signed with public key encryption to protect against unauthorised modifications. However, the signing key and password are leaked on the firmware that is already installed on the devices. This allows attackers to use the same signing key and password to sign their own malicious firmware and bypass security checks during the firmware update process.

Additionally, Belkin WeMo devices do not validate Secure Socket Layer (SSL) certificates preventing them from validating communications with Belkin’s cloud service including the firmware update RSS feed. This allows attackers to use any SSL certificate to impersonate Belkin’s cloud services and push malicious firmware updates and capture credentials at the same time. Due to the cloud integration, the firmware update is pushed to the victim’s home regardless of which paired device receives the update notification or its physical location.

The Internet communication infrastructure used to communicate Belkin WeMo devices is based on an abused protocol that was designed for use by Voice over Internet Protocol (VoIP) services to bypass firewall or NAT restrictions. It does this in a way that compromises all WeMo devices security by creating a virtual WeMo darknet where all WeMo devices can be connected to directly; and, with some limited guessing of a “secret number’, controlled even without the firmware update attack.

The Belkin WeMo server application programming interface (API) was also found to be vulnerable to an XML inclusion vulnerability, which would allow attackers to compromise all WeMo devices.

IOActive worked closely with CERT on the vulnerabilities that were discovered. CERT made several attempts to contact Belkin about the issues, however, Belkin was unresponsive.

Belkin contacted us with the following statement:

Belkin has corrected the list of five potential vulnerabilities affecting the WeMo line of home automation solutions that was published in a CERT advisory on February 18. Belkin was in contact with the security researchers prior to the publication of the advisory, and, as of February 18, had already issued fixes for each of the noted potential vulnerabilities via in-app notifications and updates. Users with the most recent firmware release (version 3949) are not at risk for malicious firmware attacks or remote control or monitoring of WeMo devices from unauthorized devices. Belkin urges such users to download the latest app from the App Store (version 1.4.1) or Google Play Store (version 1.2.1) and then upgrade the firmware version through the app.

Specific fixes Belkin has issued include:

1. An update to the WeMo API server on November 5, 2013 that prevents an XML injection attack from gaining access to other WeMo devices.

2. An update to the WeMo firmware, published on January 24, 2014, that adds SSL encryption and validation to the WeMo firmware distribution feed, eliminates storage of the signing key on the device, and password protects the serial port interface to prevent a malicious firmware attack

3. An update to the WeMo app for both iOS (published on January 24, 2014) and Android (published on February 10, 2014) that contains the most recent firmware update