Bitcoin exchange Mt. Gox has shared more details about the issues that have led to it filing for bankruptcy protection just as malware peddlers have started taking advantage of affected users’ desperation and desire to recover their lost bitcoins.

The exchange has published an announcement regarding the bankruptcy application with the Tokyo District Court, in which it is explained that its liabilities exceed its assets, and that this situation may be linked to a loss of bitcoins and customer funds:

We believe that there is a high probability that these bitcoins were stolen as a result of an abuse of this bug and we have asked an expert to look at the possibility of a criminal complaint and undertake proper procedures.

On the same day (24th), we found out large discrepancies between the amount of cash held in financial institutions and the amount deposited from our users. The amounts are still under investigation and may vary but they approximate JPY 2.8 billion.

We are investigating the causes of these problems. Since there are probably a variety of causes including hacking by third parties, we need to investigate a huge amount of transaction reports in order to establish the truth. As of this date, we cannot confirm the exact amount of missing deposit funds and the total amount of bitcoins which disappeared.

Once we discovered that bitcoins had disappeared and the discrepancies between cash funds and deposit balances, we judged that it would be difficult to continue our activities normally and we therefore closed our site at noon on the 25th (Japan time).

They have also applied for permission to “rebuild” Mt. Gox “under the supervision of the court in a legally organized procedure,” so that they could repay the debts to the affected users, who are invited to contact a newly established call center if they have any questions.

In the meantime, scams offering hope of a return of the stolen bitcoins but delivering malware have surfaced.

Malwarebytes’ Chris Boyd warns about such a scam that urges users to watch a video that apparently explains that “Mt. Gox will return all the lost Bitcoins.”

But, they are prompted to download Adobe Flash Player in order to be able to watch it. 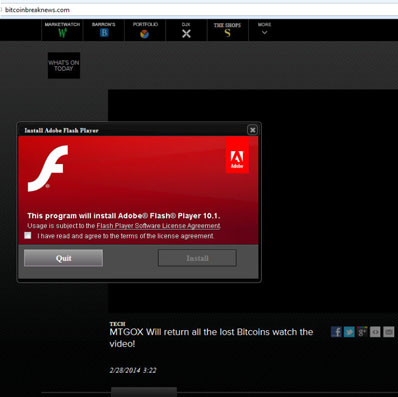 Unfortunately for them, the offered software is a malicious executable wrapped in a .rar file. The nature of the malware in question is still unknown, but there can be no doubt that it will bring only grief to the already miserable users.