Results from a survey of customers who lost valuable computer data shows the majority of consumers and businesses are taking steps to back up their data, but a range of minor oversights rendered those steps ineffective, according to Kroll Ontrack. 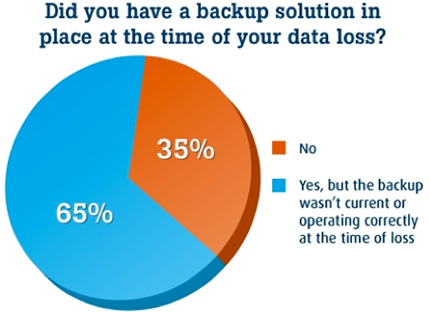 Sixty-five percent of survey respondents had a backup solution in place at the time of data loss, up from 60 percent in 2013. Of those respondents, 59 percent used an external hard drive, 15 percent had cloud backup and 10 percent used a tape backup system. Additionally, 55 percent said they diligently backed up their data on a daily basis.

So why did they still lose their data? Regardless of the solution or backup frequency, data loss may have occurred as a result of one of the following oversights and/or failures:

“With backup technology getting better in quality and price, it is no surprise we saw an uptick in the percentage of people implementing a backup solution,” Mitra said. “What is interesting is that those that spend time, effort and money to implement the solution still experienced data loss, proving that one needs to be extremely diligent to ensure their chosen backup method is successful. If all else fails, the final line of defense should include enlisting the assistance of a reputable and experienced data recovery provider.”