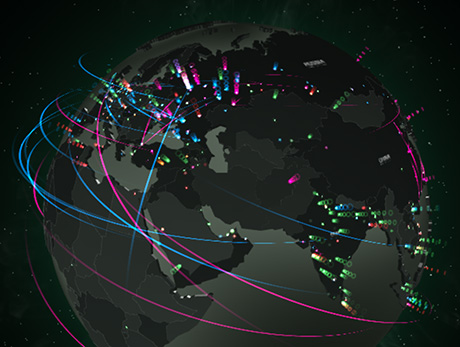 The types of threats displayed include malicious objects detected during on-access and on-demand scans, email and web antivirus detections, as well as objects identified by vulnerability and intrusion detection sub-systems.

Internal KSN mechanisms summarize the data sent automatically from thousands of protected devices whose users consented to share information about any suspicious programs they encounter. After comparing the behavior of the file on different computers, checking it against a database of hundreds of thousands of legitimate applications and using heuristic algorithms, the system issues a preliminary verdict on whether or not the object is malicious.

If it is malicious, access to the object is promptly blocked for all other Kaspersky Lab users, thus preventing an epidemic. KSN possesses the very latest information about security incidents which is added to a map of the world in real time so that anyone can view the wide variety of threats, and the speed at which they spread.

Users can rotate the globe and zoom in to any part of the world to get a closer look at the local threat landscape. Different types of threats detected in real time are marked with different colors. The user can bring a description of each threat up on the screen or disable the display of threat types.

In addition to share buttons for users of social networking sites, there are buttons to switch: the background color, the language interface and the display mode (flat map or rotating globe). There is also a handy link to check if a computer is infected with malicious software.

“Every day Kaspersky Lab handles more than 300,000 malicious objects. Three years ago the figure was just 70,000 but antivirus technologies have also changed with the times and we have no problem coping with this huge stream of traffic,” commented Denis Zenkin, Head of Corporate Communications at Kaspersky Lab. “Where do the attacks come from? Where do users click on malicious links most often? Which types of malware are the most prevalent? These are the sort of questions being asked by lots of users. Our new map of the cyberworld threat landscape allows everyone to see the scale of cyber activity in real time and to get a taste of what it feels like to be one of our experts.”