A new FireEye report details the tactics used by threat actors to compromise organizations and steal data. It also highlights emerging global threat actors, their suspected motives, as well as the types of targets and information they are after. 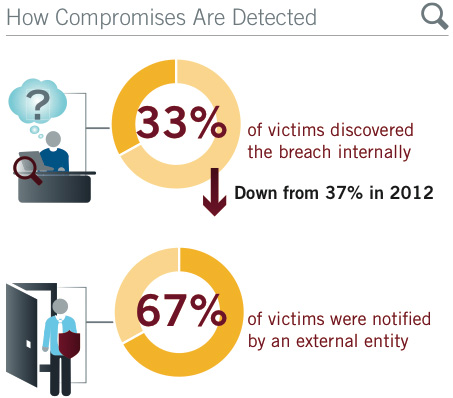 “It is hard to overstate how quickly cybersecurity has gone from a niche IT issue to a consumer issue and boardroom priority,” said Kevin Mandia, SVP and COO, FireEye. “Over the past year, Mandiant has seen companies make modest improvements in their ability to attack the security gap. On the positive side, organizations are discovering compromises more quickly, but they still have difficulty detecting said breaches on their own. It is our focus to bridge that gap and continue the positive trends our customers are seeing.”

The time it takes to detect a compromise continues to improve
The median number of days attackers were present on a victim’s network before being discovered dropped to 229 days in 2013 from 243 in 2012. This improvement is incremental relative to the drop from 416 days in 2011, however organizations can be unknowingly breached for years. The longest time an attacker was present before being detected in 2013 was six years and three months.

Organizations in general are yet to improve their ability to detect breaches
In 2012, 37 percent of organizations detected breaches on their own; this number dropped to just 33 percent in 2013.

Phishing emails largely look to capitalize on trust in IT departments
44 percent of the observed phishing emails sought to impersonate the IT departments of the targeted organizations. The vast majority of these emails were sent on Tuesday, Wednesday and Thursday.

Political conflicts increasingly have cyber components that impact private organizations
Over the past year, Mandiant responded to an increased number of incidents where political conflicts between nations spawned cyber attacks that impacted the private sector. Specifically, they responded to incidents where the Syrian Electronic Army (SEA) compromised external-facing websites and social media accounts of private organizations with the primary motive of raising awareness for their political cause.