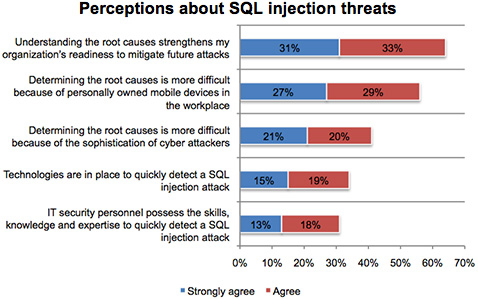 A new study found that 65 percent of respondents had experienced SQL injection attacks that successfully evaded their perimeter defenses in the past 12 months. Furthermore, each SQL injection breach took an average of nearly 140 days to discover and required an additional 68 days on average to remediate.

The research by the Ponemon Institute and DB Networks, was conducted to determine the challenges facing organizations around the pervasiveness of SQL injection attacks, and opinions on how to stop these threats.

The study analyzed responses from 595 IT security practitioners in the United States working across a broad spectrum of industries and also the public sector. Fifty-nine percent of respondents worked for organizations with 5,000 or more employees.

“We believe this is the first study to survey the risks and remedies regarding SQL injection attacks, and the results are very revealing,” said Dr. Larry Ponemon, chairman of the Ponemon Institute. “It is commonly accepted that organizations believe they struggle with SQL injection vulnerabilities, and almost half of the respondents said the SQL injection threat facing their organization is very significant, but this study examines much deeper issues. For example, only a third of those surveyed (34 percent) agreed or strongly agreed that their organization presently had the technology or tools to quickly detect SQL injection attacks. 52 percent of respondents indicated that they don’t test or validate any third party software to ensure it’s not vulnerable to SQL injection.”

Additional key findings of the study include:

“It’s well known that SQL injection attacks are rampant and have proven to be devastating to organization of all sizes,” said Brett Helm, Chairman and CEO of DB Networks. “This study delves into both the scope and many of the root causes of SQL injection breaches. Signature-based perimeter defenses simply cannot keep up with the sophistication of today’s complex SQL injection attacks. It’s interesting that this study indicates security professionals are now recognizing this and overwhelmingly had a favorable opinion of applying behavioral analysis technologies to address the SQL injection threat.”