A new IT Admin Stress Survey from GFI Software revealed that 68% of IT staff are actively considering leaving their current role due to job-related stress, despite apparent economic and staffing improvements in many businesses across the country. 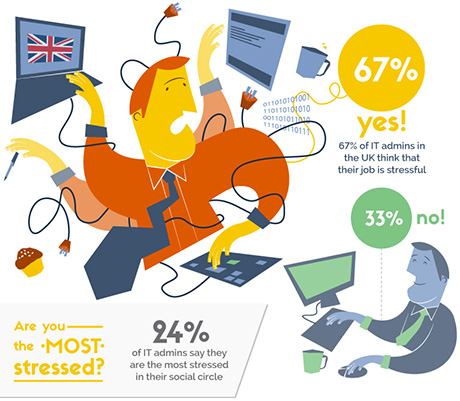 For the third year running, high levels of work stress is contributing to high levels of job dissatisfaction with in excess of two thirds of IT professionals looking for a new job due to the pressures imposed on them in their current role.

Despite improvements in the economy reducing budget pressures, the level of job dissatisfaction among UK IT professionals has reduced only slightly over 2013, when 73% of those surveyed reported they were actively looking to leave their current job due to stress.

The blind, independent study was conducted by Opinion Matters among 200 UK administrators in companies of 10 or more people. The survey gauged respondents’ stress levels at work and revealed their opinions on their main stressors, as well as how their stress level compares to that of friends and family and how it affects their personal and professional lives.

Management was clearly singled out as the biggest contributing factor to workplace stress, with half the sample of IT professionals surveyed citing management as the biggest source of stress for them. A further 24% cited a lack of budget and staff to get the job done, a small improvement on 2013 and reflecting the improvement in the UK’s job market.

Once again, IT staff frequently find themselves working additional hours over and above the 48-hour working week set down in the EU Working Time Directive, often without additional pay. On average, the IT workers surveyed would work six hours a week over and above their stated working hours, with 20% of the survey sample working between eight and 12 hours a week unpaid overtime.

While the overall number of IT staff looking to change roles is already high, in organisations with between 250-500 staff it is particularly high, with 76% of those surveyed looking for a job change, while the smallest companies with between 10 and 49 staff are more content, with 58% looking for a new role.

“IT is renowned for being one of the most stressful white-collar jobs to undertake, now more so than ever given the critical role IT plays in everything from ecommerce to facilities management,” said Sergio Galindo, general manager of the Infrastructure Business Unit at GFI Software. “There is a lot that organisations can do to reduce the burden – and with it the stress levels – carried by IT staff. Providing realistic IT budgets and staffing levels helps a lot, but there are productivity changes that can also significantly de-stress the IT department, such as investing in technology to automate personnel-intensive activities like deploying software updates and managing sprawling Wi-Fi networks and the myriad of mobile devices that users are bringing to work.”

Things are worse in the US
This years figures are in stark contrast to the US, where the same survey revealed noticeably higher levels of stress, and higher levels of job dissatisfaction among US IT professionals. Over three quarters (78.5%) of US IT staff are looking for a new role, broadly in line with the same number that report their current role to be stressful. Management is a significantly smaller influence on US IT stress levels, with just over a third (36%) of those surveyed singling out management as the root cause of their work-related stress, far lower than the UK.

IT staff hear the funniest things
In an effort to understand what it is that causes such high levels of stress among IT staff, we asked those surveyed to tell us what the most bizarre, silly or otherwise frustrating thing was that management or end users had asked of them.

For the third year running, the most popular complaint to IT by users was: “User complained they could not print/computer was not working, but failed to notice that the printer/computer in question wasn’t even switched on”.