While financial cybercrime becomes ever more entrenched through a consolidating demand and supply chain, the hacktivist landscape is more turbulent, vacillating constantly in tandem with geo-political turmoil. 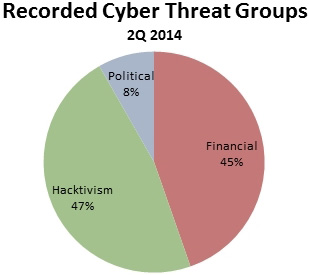 As of 2Q 2014, the hacktivist threat groups represented on average 47% of the +200 different groups recorded by ABI Research.

“Hacktivist movements continue to provide high-profile insight into political conflicts and civil liberties debates. While the Anonymous movement has been the catalyst for localized groups to organize cyber-based retaliation mechanisms against regional targets, the latest engagements are focusing on specific ethnic and religious causes as well as the support of interests against perceived enemies of the state and culture,” says Michela Menting, cybersecurity practice director at ABI Research.

Lack of employment opportunities is the primary driver for a young generation maturing in newly-connected developing economies. Intelligence collected by ABI Research reveals that many would willingly focus on security and related IT careers were the opportunities available in their home countries.

Ethnic hacktivism is an alluring tangent that is well served by strong national identities and cultural sentiment. Unfortunately, web defacement, account hijacking, server breach and data dumps in the name of hacktivism can easily provide a gateway to more serious cybercriminal operations for those without career prospects in which to apply their skill set.