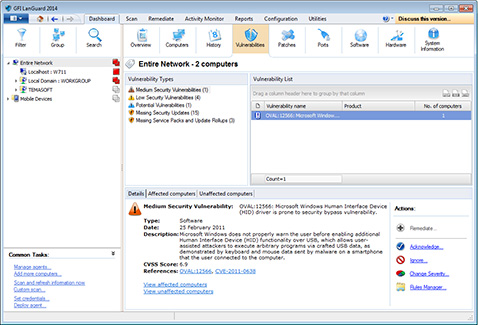 This next evolution of GFI LanGuard extends mobile device auditing to support cloud-based services – including Office 365, Google Apps and Apple Profiles Manager – and extends vulnerability assessment to a broader range of network devices.

Building on GFI LanGuard’s success as a truly heterogeneous tool that delivers vulnerability assessment and patch management for Windows, Linux and Mac OS as well as for mobile devices, GFI has built on the first release of GFI LanGuard 2014 in several key areas. Most notably, GFI LanGuard vulnerability assessment for network devices has been expanded beyond just Cisco and HP to include Linksys, Juniper, Dell, SonicWALL, 3Com, Nortel, IBM, Alcatel and NETGEAR hardware.

Better support for scanning mobile devices – users that lack an on-premises Microsoft Exchange server, but rely on cloud-based platforms like Office 365 or Google Apps, can now use GFI LanGuard to do a vulnerability assessment of the devices that connect to these servers.

Improved vulnerability assessment – the number of supported network devices and vendors increases on a continuous basis.

Centralized control – users can patch their entire network from a central console, whether for Windows, Linux, Mac OS X or 3rd-party applications.

“A network is as vulnerable as its weakest point, so businesses must not neglect the combined threat of an explosion in mobile devices connecting to their network coupled with routers, printers and switches,” said Cristian Florian, product manager at GFI Software. “GFI LanGuard 2014 R2 adds support for vulnerability across the security spectrum so companies can protect their entire network.”

The growing need for powerful patch management and vulnerability assessment was underscored by a recent independent survey of 202 IT decision makers in workplaces employing up to 250 people. Conducted by Opinion Matters, the research project examined the “Internet of Things” and the impact IT administrators expect from the increased volume of internet-enabled and addressable devices on their network. The IT professionals responding overwhelmingly cited greater exposure to existing and undiscovered threats, particularly through mobile devices, as among their most pressing concerns about the onward march of the Internet of Things into their organisation.