Facebook continues on its course to give users more privacy by making “Friends” the default sharing option for first time posters, and by introducing a privacy checkup tool that will urge users to review things like who they’re posting to, which apps they use, and the privacy of key pieces of information on their profile.

“While some people want to post to everyone, others have told us that they are more comfortable sharing with a smaller group, like just their friends. We recognize that it is much worse for someone to accidentally share with everyone when they actually meant to share just with friends, compared with the reverse,” the company noted in a blog post announcing the changes on Thursday.

“So, going forward, when new people join Facebook, the default audience of their first post will be set to Friends. Previously, for most people, it was set to Public.” Of course, users can change the default setting wherever they want.

The privacy check up tool will (eventually) make all 1.28 billion users periodically review some of their chosen posting settings: 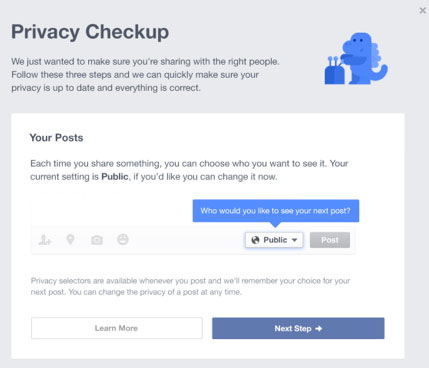 The company has also reminded of their previous changes such as the introduction of new, simplified privacy settings in April; anonymous and granular login, and so on.