Perspecsys revealed a continental cloud divide between the U.S. and Europe, based on data findings from a study it conducted at Infosecurity Europe 2014. 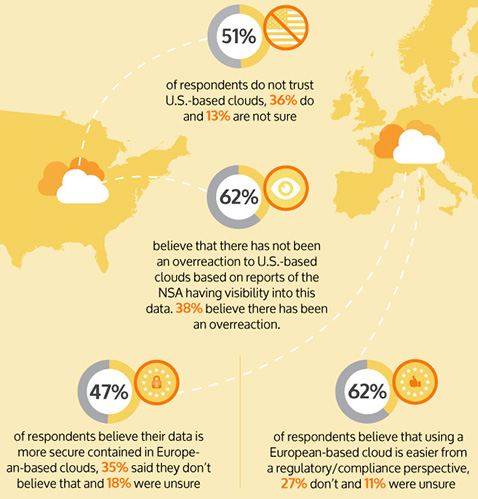 Perspecsys surveyed 117 IT professionals to determine that more than half (62%) of organizations believe using a European-based cloud is easier from a regulatory and compliance perspective. More than half (51%) of respondents even claimed that they do not fully trust U.S.-based clouds. The data points to the obvious misconceptions around deploying cloud computing in the states and overseas.

This continental cloud divide is evidenced by several instances; for example, last year concerns mounted after revelations of government surveillance programs by the NSA and others. The divide was confirmed again recently with the ruling from a U.S. judge who ordered Microsoft to provide emails to U.S. authorities, even email data that was stored in European-based data centers.

This is not a good situation: that fact that a U.S.-based company, despite location of its data center, can be required to hand over data regardless of where it is processed and stored. These are some of the reasons why an increasing number of European IT and security professionals are exploring the role that cloud data control gateways can play in helping them keep sensitive data local and resident within their home jurisdiction, even when adopting U.S.-based clouds.

Many IT departments do not trust U.S.-based clouds:

“The common thread throughout the conversations we had at Infosecurity Europe was that there are legitimate concerns around the adoption and use of U.S.-based clouds, said David Canellos, CEO of Perspecsys. “The data from our survey confirms that organizations are taking a serious look at their cloud policies and questioning where their regulated data will be more compliant and secure. This issue is not going away anytime soon, in fact – it’s growing.”