A new trojan that’s after credit card details is targeting Android users, warn antivirus experts from Dr. Web. The malware is currently targeting Russian users, but it can easily be modified to target others.

It comes in the guise of Adobe Flash Player and, once installed and run, it immediately tries to gain administrator privileges on the device. It does so by persistently asking users to allow it, and doesn’t stop popping up the message until they do.

Once that task is accomplished, the malware – dubbed BankBot – checks whether there is an active Google Play application window.

“If one is present, the malware displays a standard credit card information form used to associate a credit card with an account,” the researchers note. “All the submitted information, such as the card number, expiration date and CVC code, and the address and phone number of the cardholder, is transmitted to the attackers’ server.” 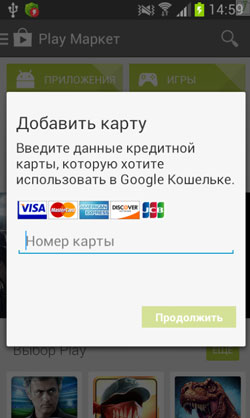 The malware is also capable of collecting information about the infected device and send it to the same server.

Finally, the trojan can be made to intercept incoming SMS messages as well as to send messages to certain numbers.

Users are advised to always be very careful when downloading apps on their Android handset, but especially if they are downloading them from third-party app markets.