Popular IRC network Freenode has suffered a security breach and is asking users to change their passwords, as they might have been compromised.

“Earlier today the freenode infra team noticed an anomaly on a single IRC server. We have since identified that this was indicative of the server being compromised by an unknown third party,” the staff posted the explanation of what happened on Saturday.

“We immediately started an investigation to map the extent of the problem and located similar issues with several other machines and have taken those offline. For now, since network traffic may have been sniffed, we recommend that everyone change their NickServ password as a precaution.” 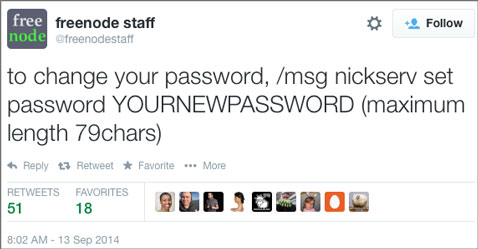 “Since traffic may have been sniffed, you may also wish to consider any channel keys or similar secret information exchanged over the network,” they added, and promised to keep users updated on the situation.

Freenode focuses on supporting free and open source software projects, and is the largest IRC network in the world, numbering between 80,000 and 90,000 users.

If you are a Freenode user, and you use a password manager, consider choosing a complex and long password for all your online accounts. In Freenode’s case, the password can include as many as 79 characters.