Even though 87 percent those surveyed in the financial service industry agree that current regulatory changes are very important or critical to keeping their companies and industry secure, new federal guidelines were having an adverse impact on their businesses, according to Radware. 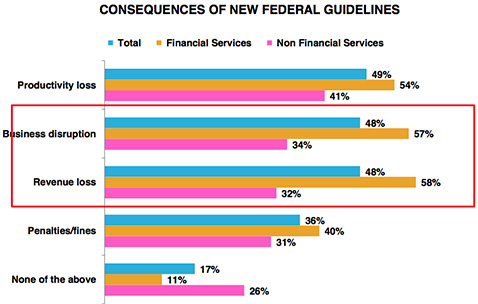 The survey also uncovered that while nearly all claim to be very or somewhat familiar with new guidelines, a substantial number, both in financial services and other industries, are still unaware of the specific regulations that would impact their business such as the Federal Financial Institutions Examination Council (FFIEC) Joint Statement on DDoS Cyber Attacks and Risk Mitigation.

In order to manage new guidelines, respondents cited investing in new or specialized technologies as the most common approach (53 percent) to currently dealing with these issues, followed by changing security processes, protocols and mandates (49 percent) and creating new security models (47 percent). 43 percent said they assigned extra budgets, with an average increase of 14 percent to address new federal regulations.

Results also show that escalated expenditures and resources were not the only concern. 86 percent of financial services respondents are more concerned about the possibility of cyber-attacks than non-financial organizations, and believe their businesses are ill-prepared to safeguard against them.

A small amount of respondents stated their business does not have a strategy for protecting against DDoS attacks (eight percent).

Radware commissioned an in-depth survey from IDG Research Services. Chief among the respondents were CIO/CTOs representing the financial services industry with global annual sales of $5 billion or more.