Akamai has observed the use of a new reflection and amplification DDoS attack that deliberately misuses communications protocols that come enabled on millions of home and office devices, including routers, media servers, web cams, smart TVs and printers. 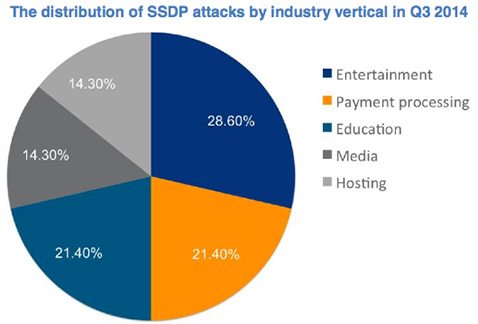 The protocols allow devices to discover each other on a network, establish communication and coordinate activities. DDoS attackers have been abusing these protocols on Internet-exposed devices to launch attacks that generate floods of traffic and cause website and network outages at enterprise targets.

“The number of UPnP devices that will behave as open reflectors is vast, and many of them are home-based Internet-enabled devices that are difficult to patch. Action from firmware, application and hardware vendors must occur in order to mitigate and manage this threat,” Scholly added.

They found 4.1 million Internet-facing UPnP devices are potentially vulnerable to being employed in this type of reflection DDoS attack – about 38 percent of the 11 million devices in use around the world. PLXsert will share the list of potentially exploitable devices to members of the security community in an effort to collaborate with cleanup and mitigation efforts of this threat.

“These attacks are an example of how fluid and dynamic the DDoS crime ecosystem can be,” explained Scholly. “Malicious actors identify, develop and incorporate new resources and attack vectors into their arsenals. It’s predictable that they will develop, refine and monetize these UPnP attack payloads and tools in the near future.”