Over 200,000 Facebook users have so far fallen prey to a like-farming scam promising two free Audi R8 cars, and thousands are joining the victim list each hour, according to Bitdefender. 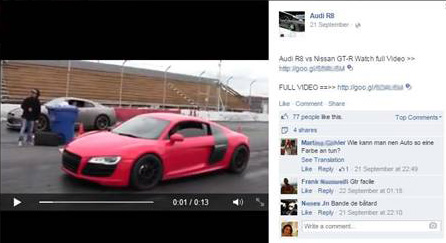 At the time of analysis, the misleading Audi page had gathered almost 180,000 likes and over 210,000 shares. The numbers are growing by the thousands from one hour to the next. Facebook users that have enrolled in the free Audi R8 “giveaway” to date are from the UK, Germany, Denmark, the US, Australia, South Africa and Malaysia.

“Like-farming may not seem the worse things scammers can do on Facebook. However, it has repercussions for users and companies’ reputations and can even lead to identity theft,” states Catalin Cosoi, Chief Security Strategist at Bitdefender. “Like-farming Facebook pages use the high number of fans to launch other fraudulent activities such as malware and survey scams to a wide audience. The database of unwary users can also be sold on the black market and used for more targeted attacks.”

Bitdefender was already detecting a tricky javascript within the websites hosting the videos as JS:Trojan.JS.Likejack.A. This malicious code is used for clickjacking on hidden commercials. To increase the sense of urgency and persuade users to spread the scam further as soon as possible, fraudsters announced a deadline of today (20th November) for their fake competition.

“2 Lucky Winners Will Be Announced On November 20,” the bait message reads. Scammers explain that in order to win the “contest,” users competing for the German luxury car must like the free Audi R8 post and also name their desired colour and share the message on their timelines. Bitdefender has reported the malicious web page to Facebook, and warns users to be wary of any competitions not hosted on companies’ official pages.

The Audi R8 was introduced by the German car manufacturer in 2006, and still attracts a large number of fans. Other brands that have been used to promote Facebook scams include BMW and Harley Davidson. A recent Bitdefender study on the top five baits spreading on Facebook in the last two years showed fake giveaways represent 16.51 per cent of all scams flooding the social network.