It’s holiday shopping season again, and consumers will join the rush to buy devices and accessories for loved ones. They’ll scoop up phones and tablets, plus cases, covers and bags to shield from scratches and bumps. But while they are protecting their devices from physical harm, most will leave their phone’s Wi-Fi connection – and their private data – open to exposure. 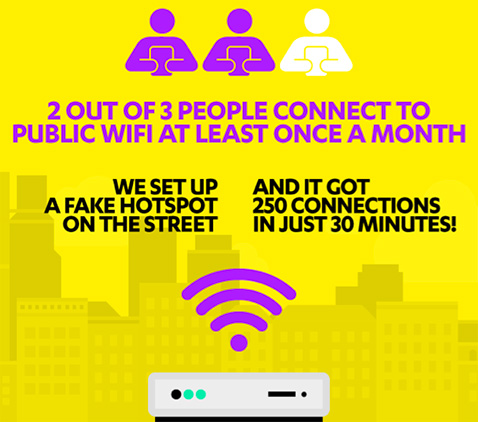 Device cases and covers are extremely popular. Most people won’t own a phone or tablet for long without wrapping some kind of protection around it. Amazon.com’s “Cases and Covers” page contains a whopping 13 million items. And by the end of 2014, mobile phone aftermarket accessories are projected to generate $51 billion in total revenue, with protective cases the highest-selling item at $13 billion.

But while people are doing a good job of protecting their devices from physical harm, they’re leaving a less obvious but even more important area wide open. Unsecured, unverified public Wi-Fi hotspots open consumers up to exploitation by data thieves who can set up fake hotspots to spy on data traffic.

According to a recent F-Secure survey two out of three people connect to public Wi-Fi hotspots at least once a month. But according to Sean Sullivan, Security Advisor at F-Secure, most never take care to protect their connection from snoops, even though VPN apps that offer privacy on Wi-Fi are readily available.

“Many people have no qualms about using public Wi-Fi to connect while out and about, and most do it completely unprotected,” Sullivan says. “If you’re not protecting your device’s connection, whatever you do while connected to a public hotspot is like shouting in a crowded room. So while people are spending a lot on physical device protection, they’re spending zero on the part that’s really important. Their data, their privacy.”

But isn’t setting up a fake hotspot difficult and too expensive to do? Not at all. For under 250 dollars (less than an iPad mini) a crook can purchase or cobble together a device that will imitate a legitimate Wi-Fi hotspot. They can then spy on consumers’ data traffic and harvest usernames, passwords and other personal details. So while a fancy leather cover may protect that tablet if you drop it, it won’t do a thing for your personal data if you’re surfing a poisoned hotspot.

“An iPad tablet cover costs 39 dollars. For well under that, you can get a year’s worth of connection protection to make sure your private data stays private while you’re connecting on the go,” Sullivan says. “If your device gets scratched or bumped, the damage is cosmetic. And nowadays if your screen is cracked, there are even repair services that will drive to you in a little car and fix it for you. But if your passwords or other private info are stolen, it’s much more difficult to re-secure your online accounts and to repair the damage to your personal reputation.”