Evaluating online cybersecurity awareness of 2,011 consumers from the U.S. and U.K., a new survey by One Poll and Dimensional Research revealed that more than 40 percent of respondents believe using a third party payer such as PayPal or Google Wallet is the safest way to pay for goods online. 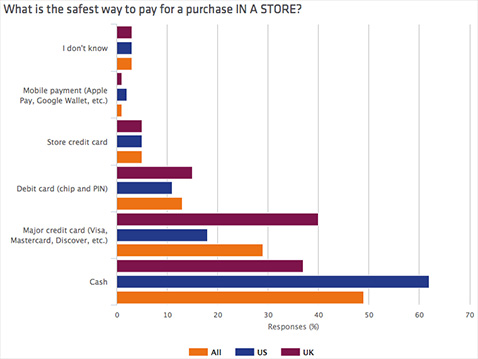 Only one percent of respondents believe using a third party mobile payment provider such as Apple Pay or Google Wallet is a safe way to pay for in-store purchases.

“With so many retail breaches this year, it is not surprising that people are now more comfortable shopping online,” said Dwayne Melancon, CTO at Tripwire. “However, consumers still need to be wary of where they are storing their data. Third party payment providers make the online shopping experience easier, but they can and will be targeted just the same as the retailers themselves.”

“Even though consumers may not be responsible for charges that are made due to fraudulent charges they still need to be vigilante,” said Ken Westin, security analyst for Tripwire, “It’s very clear that retailers and card issuers cannot protect credit card users data and mitigate fraud, so consumers need to take some responsibility. Everyone should review credit card statements carefully and be on the alert for suspicious activity so they can report it immediately.”

According to Adobe’s 2014 Digital Index, online shopping data for Cyber Monday indicates that shoppers have already spent an estimated $2.65 billion online, a 16 percent increase from 2013.

Consumers need to take extra precautions when they shop online because the security of a retail website is not immediately apparent. For example, a recent Sophos study revealed that 33 percent of retailers in the U.K. do not have network protection beyond standard firewalls. In addition, a report by researchers at Stony Brook University discovered that sites carrying security seals are frequently more vulnerable to breaches.