Eight in 10 consumers (80 percent) say they are more likely to buy from consumer products (CP) companies that they believe protect their personal information, yet only 37 percent believe that these companies are adequately doing so, according to a new Deloitte study. 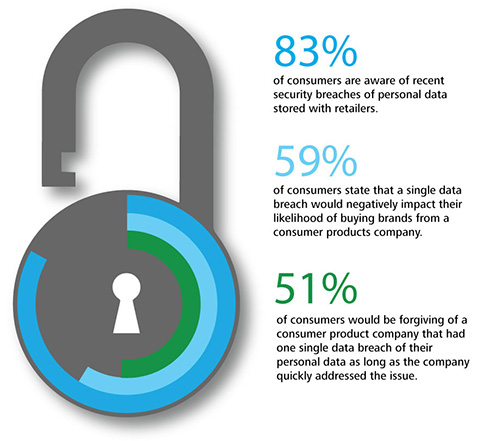 Nearly six in 10 consumers (59 percent) state that a single data breach would negatively impact their likelihood of buying brands from a CP company, although roughly half (51 percent) would be forgiving of a CP company that quickly addressed the issue.

“Consumer product companies are collecting more detailed individual profiles, and unfortunately, the more data a company gathers, the more attractive that information becomes to malevolent parties,” said Pat Conroy, vice chairman, Deloitte LLP and consumer products sector leader. “Many of these companies have yet to establish themselves as stewards of consumer data protection, but stand to gain a great deal by strengthening their privacy and security practices and communicating them to consumers. Doing so can help distinguish these companies from competitors and subsequently impact purchase decisions.”

Consumers appear to place a higher importance on a company’s privacy policy than many CP executives may think. Nearly three-quarters (73 percent) of consumers agree that easy-to-understand privacy policies would increase their trust in CP companies, whereas only 41 percent of executives responded the same way.

Many surveyed executives indicated that the data analytics programs they utilize to support marketing programs positively impact sales. More than eight in 10 (82 percent) executives say that targeted marketing via online/mobile advertising has increased sales, and nearly the same amount cite targeting via social media (79 percent) and via online/mobile coupons (79 percent).

However, consumers presently appear hesitant to allow CP companies to use their personal information for targeted marketing. While more than four in 10 (42 percent) respondents are willing to allow their purchase history to be analyzed, few believe that their demographics (33 percent), social media postings (10 percent), online search history (20 percent) or email content (5 percent) should be analyzed by software programs. One survey respondent noted, “It would be hard for me to feel reassured that big companies are protecting my interests.”

“As investment growth in targeted digital marketing continues to outpace investment growth in traditional approaches, the drive to collect consumer information intensifies; however, CP companies may miss out if they underestimate the connection between transparency and marketing impact,” said Frank Milano, partner, Deloitte & Touche LLP, and U.S. consumer products enterprise risk services leader. “Consumer trust in data privacy and security can translate into competitive advantage, and companies should treat their policies not just as a risk management issue, but as a central component of brand-building and corporate reputation.”

CP executives may be overestimating consumers’ comfort with sharing personal information and the value they receive from doing so. While nearly half of executives (47 percent) surveyed feel that consumers believe the risks of sharing personal information are worth the personalized promotions, advertising or coupons they receive, only one-quarter (25 percent) of the surveyed consumers agreed.

Companies struggle to keep pace with sophistication of threats