Tripwire announced an analysis of Microsoft patch data from 2014. 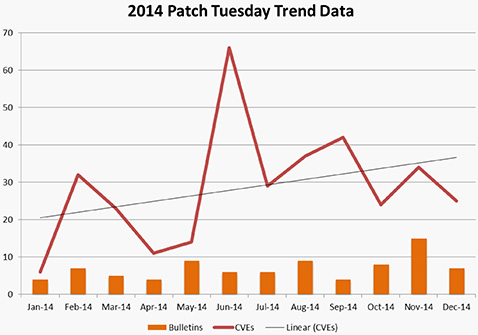 Key findings from the Microsoft patch analysis include: 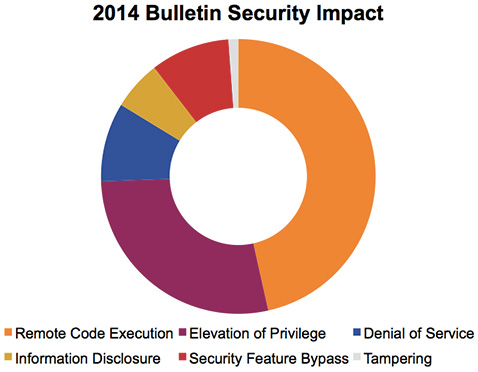 Thanes has two predictions for 2015 patches: “First, I don’t foresee an abrupt change in the CVE per bulletin density over the next year. It is likely that Microsoft will continue to pack a lot of CVEs into every bulletin, and the majority of this density will likely be due to Internet Explorer. Second, it’s possible that we will see an uptick in the number of out-of-band Microsoft security bulletins due to Google’s Project Zero. On average, Microsoft will only have 70 to 80 days to fix, test and deliver patches for vulnerabilities discovered by Project Zero, given the fixed Patch Tuesday cycle and Project Zero’s rigid 90-day time frame.”

“It’s interesting that there was such a massive drop in critical patches from 2013 to 2014,” said Craig Young, security researcher for Tripwire. “Windows XP wound down in April 2014, but I don’t see any drop-off in the trend data specific to its end of life. Dropping Windows XP support could have led to the reduced number of critical bulletins due to the improved security measures of newer versions. However, it’s possible that the overall bulletins did not decrease because a lot of Windows XP code continues to be used in Microsoft’s newer systems.”