Film director Laura Poitras’ Citizenfour has been recognized as past year’s Best Documentary Feature by the Academy of Motion Picture Arts and Sciences. 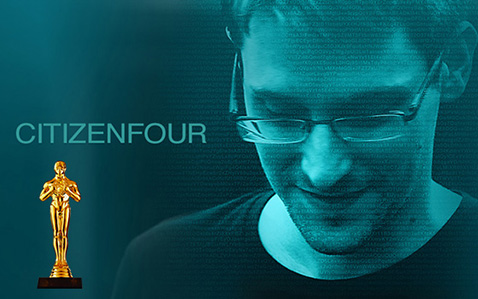 Most of the material for the documentary film that chronicles how Edward Snowden went about contacting Poitras and reporter Glen Greenwald, shared and explained the documents he exfiltrated from the NSA, and successfully avoided being extradited to the US, has been recorded in Hong Kong in June 2013, when the two reporters and The Guardian’s Ewen MacAskill first met with Snowden in person.

“The disclosures that Edward Snowden revealed don’t only expose a threat to our privacy but to our democracy itself,” Poitras noted in her acceptance speech, in which she thanked the documentary community, the organizations that supported them, Edward Snowden and other whistleblowers.

The win was welcomed by Snowden, who said that he hoped this award “will encourage more people to see the film and be inspired by its message that ordinary citizens, working together, can change the world.”

The documentary, titled after the pseudonym Snowden used when first contacting Poitras, is the third one in a informal trilogy that examines the issue of American power after the events of 9/11.

The first one is My Country, My Country, for which Poitras has been also nominated for the Oscars in 2007, and the second one is The Oath, released in 2010.