Nearly two years after news outlets started reporting on previously publicly unknown surveillance and data collection practices by the US NSA and its counterparts around the world, not many Americans have changed their communication habits or online behavior, but nearly two-thirds of those who know a lot or a little about the government’s actions have become less confident the surveillance efforts are serving the public interest, say the results of the latest Pew Research Center report. 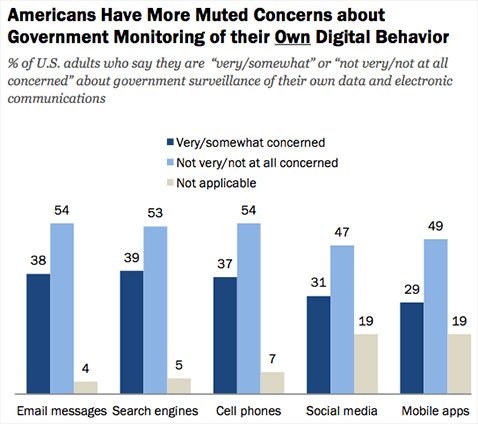 Since Snowden’s revelations that the NSA has been collecting data from large American technology companies and phone metadata from telecommunications companies, as well as collecting Web traffic around the world – all in the name of national security – most Americans still believe that monitoring communications of suspected terrorists (82%), foreign leaders (60%), foreign citizens (54%), and American leaders (60%) is acceptable.

What 57% of them find unacceptable is the US government monitoring the communications of US citizens.

“34% of those who are aware of the surveillance programs (30% of all adults) have taken at least one step to hide or shield their information from the government. For instance, 17% changed their privacy settings on social media; 15% use social media less often; 15% have avoided certain apps and 13% have uninstalled apps; 14% say they speak more in person instead of communicating online or on the phone; and 13% have avoided using certain terms in online communications,” noted Lee Rainie and Mary Madden.

Those under the age of 50 and those who have heard “a lot” about the surveillance programs are more likely to make one or more of these steps.

But by far the most interesting conclusion of this study (for me) is that a considerable percentage of American users aren’t even aware that privacy tools that could help shield their online activity and communications exist, and even when they do, most of them believe it’s difficult to find them, and have cited that as one of the reasons why they haven’t changed their behavior.

The survey had several open-ended questions, and some of the responses that have been included in the final report show that some users are more concerned about sharing too much information on the Internet than government monitoring.

For more extensive results, you can download the report here.