While most companies believe virtualization technology is a strategic priority, there are clear risks that need to be addressed. Ixia surveyed more than 430 targeted respondents in South and North America (50 percent), APAC (26 percent) and EMEA (24 percent). 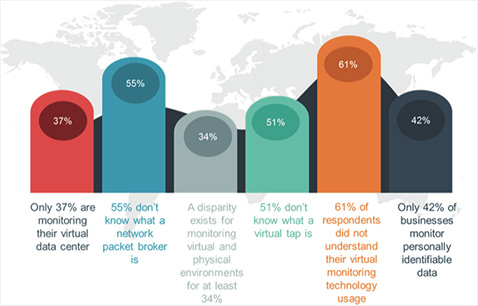 Virtualization technology could create an environment for hidden dangers within enterprise networks. When asked about top virtualization concerns, over one third of respondents said they were concerned with their ability (or lack thereof) to monitor the virtual environment. In addition, only 37 percent of the respondents noted they are monitoring their virtualized environment in the same manner as their physical environment. This demonstrates that there is insufficient monitoring of virtual environments. At the same time, over 2/3 of the respondents are using virtualization technology for their business-critical applications. Without proper visibility, IT is blind to any business-critical east-west traffic that is being passed between the virtual machines.

There are knowledge gaps regarding the use of visibility technology in virtual environments. Approximately half of the respondents were unfamiliar with common virtualization monitoring technology – such as virtual tap and network packet brokers. This finding indicates an awareness gap about the technology itself and its ability to alleviate concerns around security, performance and compliance issues. Additionally, less than 25 percent have a central group responsible for collecting and monitoring data, which leads to a higher probability for a lack of consistent monitoring and can pose a huge potential for improper monitoring.