The average number of cloud apps (both sanctioned and unsanctioned) continued to grow: organizations now use an average of 730 cloud apps. This represents a 16 percent increase from the previous quarter. Nine out of every ten apps in use today are not enterprise ready. Also, 13.6 percent of app users have had their account credentials compromised.

“While there’s a more common understanding and acceptance of shadow IT across organizations, there’s a corresponding rise in the volume of unsanctioned cloud apps in use,” said Sanjay Beri, CEO at Netskope. “This should give IT pause, but it’s not a cause for mass panic. Like it or not, this is the new reality for IT; it’s thus critical that organizations maintain a deep level of visibility into their cloud app infrastructure so they can spot a suspicious pattern before it becomes an issue.” 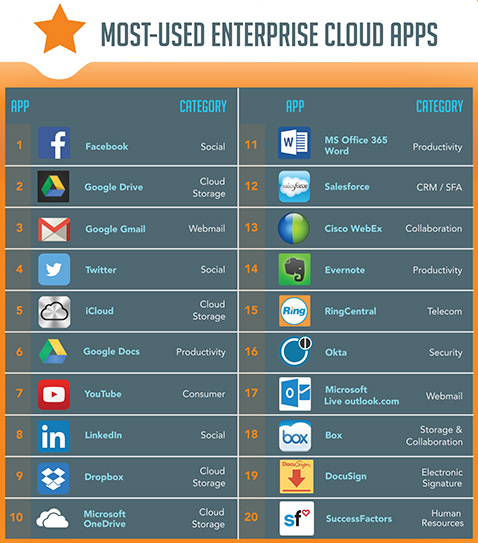 As in past reports, cloud storage and social apps dominate the top 20 apps used in business, and comprise nearly a third (32 percent) of total cloud app usage. Other categories represented include Webmail, Collaboration, and Customer Relationship Management/Salesforce Automation (CRM/SFA).

Policies can be enforced based on a number of factors, including user, group, location, device, DLP profile, activity, and more. Policies observed include: blocking the download of personally-identifiable information from an HR app to a mobile device; to alerting when users share documents in Cloud Storage apps with someone outside of the company; to blocking unauthorized users from modifying fields in Financial/Accounting apps. Data loss prevention (DLP) policy violations involving the download of data outnumber those involving the upload of it by more than two to one. The three top categories for DLP policy violations include Cloud Storage, Webmail, and CRM/SFA.