A widening gap is emerging between the perception and the reality of perimeter security effectiveness amongst global IT decision makers. Gemalto research shows increasing levels of investment in this area of data protection, despite an exponential growth in the number of data breaches. 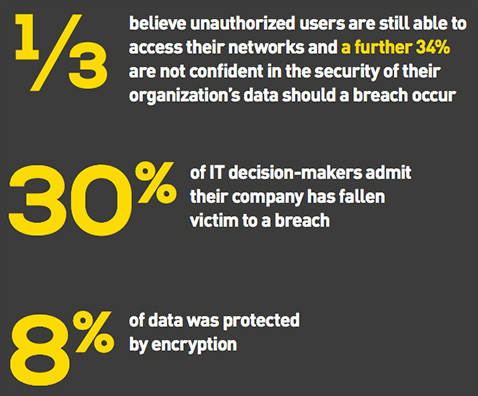 Interestingly, when thinking of the most recent breaches, the average amount of breached data protected by encryption was below 8%, highlighting the need for a more robust data protection strategy.

Nevertheless, a third (33%) believe unauthorized users are still able to access their networks and a further 34% are not confident in the security of their organization’s data, should a breach occur. In fact, the survey reveals that as a result of recent high profile breaches, 71% of organizations have adjusted their security strategy, but are still focused on perimeter security.

Adding to the confusion, nearly three quarters of IT decision makers (72%) stated that their investment in perimeter security has increased over the past five years, though 30% admitted that in the past 12 months their company has been victim to a breach, showing the need to approach security differently.

Although high-profile data breaches have driven over seven in 10 (71%) organizations to adjust their security strategy, more than three in five (62%) respondents are no more confident than they were this time last year in the security industry’s ability to detect and defend against emerging security threats.

“With the number of sophisticated breaches on the rise, relying on perimeter security systems alone is no longer enough. Traditional security staples such as firewalls and anti-virus should be part of a much greater security strategy. IT decision makers need to take into account that if someone is motivated enough they will breach a network, no matter how well it is protected,” said Tsion Gonen, Vice President of Strategy for Identity and Data Protection at Gemalto.

As a result of these attacks, nine out of 10 organizations (90%) suffered negative commercial consequences, including delays in product or service development (31%), decreased employee productivity (30%), decreased customer confidence (28%), and negative press (24%). This highlights the severe consequences of data breaches, which can be damaging both to an organization’s reputation and bottom line, as well as to customers’ confidence in entire industry sectors.

“Organizations still place too much emphasis on perimeter security, even though it has proven to be ineffective”, added Gonen. “Decision makers should place greater importance on customer data, and look to adopt a “secure the breach’ approach that focuses on securing the data after intruders penetrate the perimeter defenses. This means they need to attach security directly to the data itself using multi-factor authentication and data encryption, as well as securely managing encryption keys. That way, if the data is stolen, it is useless to the thief.”