RedSeal unveiled its survey of high-ranking executives that illustrates widespread concern regarding the potential effects of cyberattacks in corporate America.

Most of the C-level professionals surveyed readily acknowledge that a coordinated assault launched by sophisticated cybercriminals would wreak ongoing havoc on business operations, cause considerable harm to a brand, and potentially affect related companies, even entire industries. 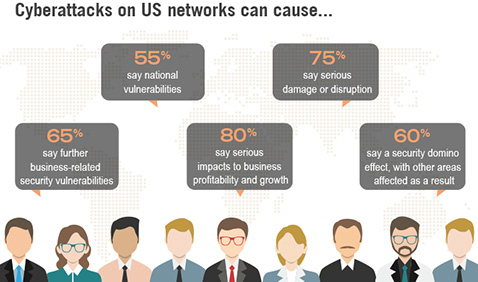 Many also point out that in the networked economy, containing the problems caused by a sustained network attack will be very difficult. In fact, a major network disruption at a single company or network can easily disrupt or even wreak havoc on a local, state, national and even global level.

More specifically, almost 80% admit that such attacks can inflict “serious impacts to business profitability and growth,” and bring about “serious brand damage.” A large number, 45%, also related personnel concerns, saying such events will lead to a “big hit on employee productivity.” More than 43% also predict business downtime, while more than 41% fear “internal/organizational disruption or chaos.”

Moreover, many of the respondents are also very aware that in this intricately networked economy, it will be very difficult to contain the problems once an attack begins. Asked what other areas might be affected by the “resulting ripple effects of cyberattacks on one network,” a clear majority, 64%, cited “further business-related security vulnerabilities.” More than half, 56%, went further, citing “national vulnerabilities,” and an even larger number, 59%, agreed with the possibility of a security domino effect.

In fact, the idea of a domino effect—one successful attack on one network leading directly to attacks on different networks in diverse but connected sectors of the economy—clearly resonated strongly with the executives surveyed.

More than half the respondents, 52%, singled out “defense systems” as being potentially affected by a cyber-criminal incident or data breach, while 45% cited “border security.” And taking a big picture approach, a significant 59% said such attacks will take their toll on “economic security.”

Judging by the responses, most important sectors of the economy will be severely affected. These include:

The study surveyed more than 350 C-level executives (CEOs, CIOs, CISOs and CSOs). All are at organizations with 250 or more employees, and at least 20% lead companies with more than 1,000 employees.