When examining the study, Trevor Welsh, Sales Engineering Manager at ThreatStream, found one point that stood out. “48% of respondents to the question concerning the value of sharing between federal agencies and the private sector felt that this intelligence would only be “Somewhat Valuable”, or “Not very valuable” to their organization. I do not believe that the private sector thinks the public sector is bad at threat analysis. Instead, I believe this strongly brings to light the issue of relevance.” 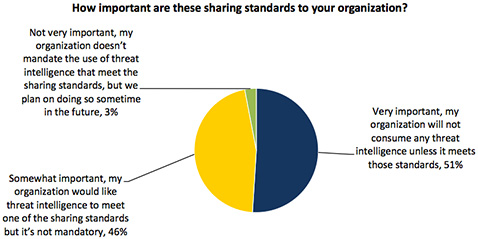 “There is clearly an understood value in leveraging threat data, but organizations are finding it difficult to collect, analyze and pinpoint critical threats,” said Jon Oltsik, ESG senior principal analyst. “According to our research, automation is needed for organizations to wade through the mass of alerts they receive, and standards are needed for the secure sharing of threat intelligence.”

The study analyzed responses from more than 300 online surveys from IT and security professionals who are directly involved in the planning, implementation, and/or daily operations of their organization’s threat intelligence program, processes, or technologies. Participating organizations were North American based with more than 1,000 employees, spanning financial, business services, manufacturing and retail vertical markets.
More about
Share this