“PandaLabs published its Quarterly Report for Q1, analyzing the IT security events and incidents from January through March 2015.

The multinational security vendor detected over 225,000 new malware strains per day in the first quarter of the year, with peaks reaching 500,000. This record-breaking figure represents a 40 percent increase over Q1 2014, and is well above the average for the entire year, which stood at approximately 205,000 new malware samples per day.

As is usually the case, most of these specimens were variants of known malware conveniently modified by virus writers to evade detection by antivirus laboratories. Trojans continued to be the most common threat type, representing 72.75 percent of all new malware, and the main source of infections (76.05 percent of the total).

The first months of the year were dominated by ransomware attacks, especially CryptoLocker, and it is safe to say that ransomware has become cyber-criminals preferred method to make money from companies stolen information.

That was the case with ten companies in the oil and gas maritime transportation sector, which fell victim to this type of attack, as revealed by Panda Security in a report on a hacking campaign dubbed Operation Oil Tanker: The Phantom Menace which targeted oil tankers.

In this particular case, the attackers didnt use any kind of malware, but legitimate files executed recurrently, explained Luis Corrons, Technical Director of PandaLabs at Panda Security.

Other popular attack methods exploited over the past quarter include social networks scams and mobile malware. One of the most notable scams made use of a fake $500 Zara gift card giveaway on Facebook to trick users. The scam spread like wildfire. In just a few hours over 5,000 people had joined the event, and more than 124,000 invites had been sent out.

Meanwhile, Android was in the bullseye for mobile malware attacks more than ever, this time through malicious SMS messages.

The average number of infected PCs across the globe stands at 36.51 percent, up more than six percentage points compared to 2014. China once again led this ranking (48.01 percent of infected PCs), followed by Turkey (43.33 percent) and Peru (42.18 percent).

The list of least infected countries is dominated by European countries, the top one being Norway (22.07 percent of infected PCs). 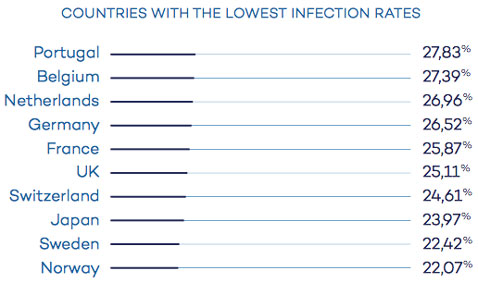 Other countries with a malware infection rate below the worldwide average include Denmark (28.18 percent), Finland (28.59 percent), Venezuela (33.35 percent) and USA (34.03 percent), among others.

Targeted attacks on businesses with the aim of blackmailing them with ransomware or directly stealing sensitive information are on the rise, and it is clear that companies must step up their defense.

We must never forget that cyber-criminals sole motivation is money and information, and as our lives become more digital, we are more exposed to cyber-threats. This year we can expect to see more ransomware attacks, as well as new scams spreading through social media and mobile applications, concluded Corrons.”