Illegal reproduction and distribution of copyrighted material on the Web is booming as a result of security breaches in both mobile and desktop software applications. 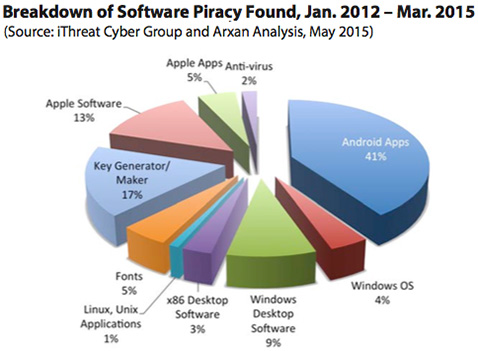 Arxan and iThreat Cyber Group (ICG) analyzed data collected over the past three years that examined the distribution of unauthorized digital assets on the Dark Web and indexed sites that are focused on distributing pirated releases. Thousands of sites were analyzed, including over 50 in the sole business of distributing pirate releases.

With the revealed source-code, pirates are able to copy and/or maliciously modify and then redistribute software quite easily. MetaIntelli’s June 2015 analysis of 96,000 Android apps from the Google Play store found that less than 10% of them had protected binary code. 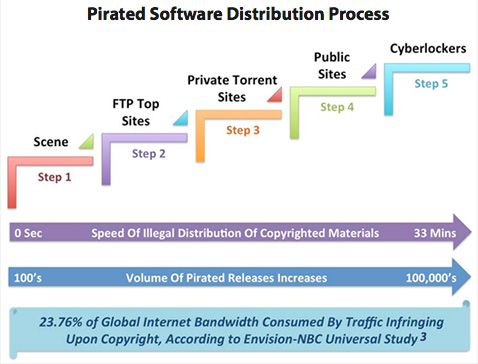 Most attackers are stealing cryptographic keys that govern access to digital media and using these keys to decrypt encrypted digital media files, and illegally distribute them.

Hundreds of millions of Internet users worldwide are accessing pirate distribution sites. Many of these sites survive based on ad revenue, while others charge users a fee or request donations from their users. The largest content theft sites generated more than $200 million in advertising-driven revenues in 2014.

“The threat posed by piracy cannot be limited to its effects on one company, one industry or one country. The sheer number of cases in the US and abroad, dictates software, digital media and mobile gaming industries become savvier with regards to techniques for combatting pirated releases across national boundaries,” said Jeff Bedser, CEO of iThreat Cyber Group. “The best thing content owners can do is continually monitor the marketplace and equip themselves with intelligence tools and leverage data and application protection techniques to fight piracy head on.”
More about
Share this