More than half of IT security professionals (52 percent) said loss of customer trust and confidence were the most damaging consequences of DDoS attacks for their businesses, according to a survey conducted at RSA Conference 2015 and Infosecurity Europe 2015 by Corero Network Security. 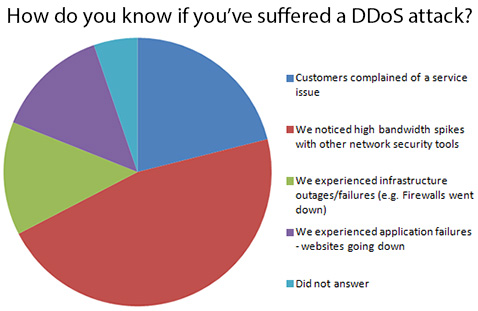 One-fifth of respondents cited a virus or malware infection as the most damaging consequence of a DDoS attack, and 11 percent indicated that data theft or intellectual property loss as a result of a DDoS event is of highest concern.

“DDoS attacks are often used as a distraction technique for ulterior motives. They’re not always intended for denying service, but rather as a means of obfuscation, intended to degrade security defenses, overwhelm logging tools and distract IT teams while various forms of malware sneak by,” according to Dave Larson, CTO at Corero Network Security.

Nearly half of those surveyed admitted to responding reactively to DDoS attacks. When asked how they knew that they suffered a DDoS attack, 21 percent cited customer complaints of a service issue as the indicator of an attack, while 14 percent said the indicator was infrastructure outages (e.g. when their firewalls went down), and another 14 percent said application failures, such as websites outages, alerted them to the DDoS event.

In contrast, less than half of respondents (46 percent) were able to spot the problem in advance by noticing high bandwidth spikes, an early sign of an imminent attack, by using other network security tools.

Approximately 50 percent of respondents rely on traditional IT infrastructure, such as firewalls or Intrusion Prevention Systems to protect against DDoS attacks, or they depend on their upstream provider to deal with the attacks.

Only 23 percent of those surveyed have dedicated DDoS protection via an on-premise appliance-based technology or from an anti-DDoS cloud service provider.

However, it appears that many organizations are more in tune with the ramifications of DDoS attacks, as 32 percent indicate that they have plans to adopt a dedicated DDoS defense solution to better protect their business in the future.

“It looks like this survey is trying to sell the merits of on-premise strategy equipment, said Jag Bains, CTO at DOSarrest. “What it fails to elaborate on, is the challenge of enterprise or hosting networks that do not have large amounts of capacity to be even be able to deliver traffic to the various on premise solution out there, which is a very costly endeavor in terms of capex and opex should they decide to upgrade their capacity,” concludes Bains.

Avi Freedman, CEO at Kentik, agrees with Bains: “In many cases, organizations are finding on-premise DDoS appliances to be overly expensive to select, evaluate, and run, and they can’t effectively alone protect against the largest attacks. Further, cloud-based or peering-based mitigation techniques are working well in the field for hundreds of customers, so long as there are reliable mechanisms to invoke them in a timely manner. Some of the highest traffic web properties in the world use cloud DDoS mitigation providers with no specialized on-prem hardware deployed or necessary.”
More about
Share this