The findings of a new survey from Tyntec, based on responses from Spain, the UK and US, reveal sluggish adoption of BYOD policies by organizations, while its employees voice strong privacy concerns and preference on device usage. 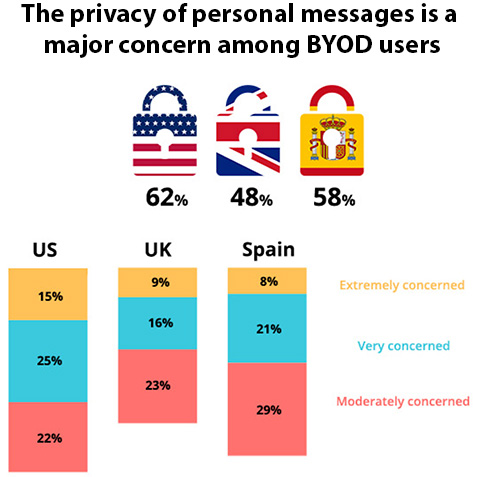 The UK showed the smallest percentage of BYOD governance with a mere 18% of respondents claiming to have awareness of a formal policy in place. For those employees using a mobile phone for work purposes, the majority of respondents indicated a preference for separate phone numbers for work and personal usage, with Spain showing the strongest preference at 91%.

“In many cases the whole notion of BYOD is not compatible with the traditional notion of IT policy – after all you are trying to apply corporate IT rules to a device you don’t own, that you didn’t spec, and that you have no control over the software running on it,” according to Sergio Galindo, general manger of GFI Software.

“This is not to say that IT policies towards BYOD are unenforcible – far from it – but it does require some new thinking, and some additional effort to educate and inform the workforce of their obligations and responsibilities when using their own hardware on the premises, and when they are connecting that hardware to company resources such as Internet connections, storage and applications. Staff need to be regularly reminded of the current policies, why they matter and need to know whenever something changes. Staff won’t actively seek out IT policy best practice, you have to take it to them and you have to be prepared to withdraw service and support when rules are not adhered to,” concluded Galindo.

Privacy and reimbursement were cited as major concerns for employees using their personal phone for work.

The majority of employees across the US (61%), UK (43%) and Spain (69%) claim to use their personal mobile phone for work-related tasks. Oftentimes, work-related mobile usage takes place outside of office hours. Nearly all employees using mobile phones for work continue their work usage during non-business hours, with Spanish employees showing the highest tendency to do so at 95%, followed by the US (94%) and UK (89%).

Despite the considerable amount of work-related functions carried out on personal phones, there appeared to be a limited number of BYOD policies defined by employers. Only a small subset of employees claimed to have a formal BYOD policy in place, with US showing the highest percentage at 34%, compared to 18% in the UK and 25% in Spain.

For those employees performing about 50% of work-related tasks on a mobile phone, nearly half of respondents show a strong preference for using one device with two separate phone numbers – for work and personal – to switch between during the course of the work day. This beat out the option of carrying two separate devices (39%). 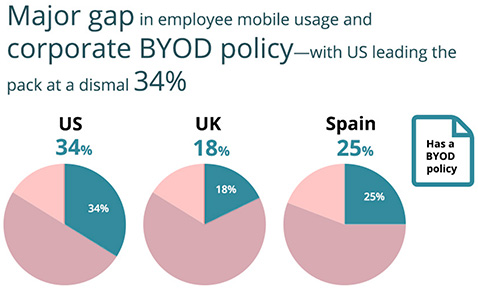 Potential drivers for separation preferences can be found by expressed concerns over reimbursement and privacy. Employees that are currently using their personal device for work are moderately to extremely concerned about having to pay for business usage on their phone bills in the US (62%), UK (54%) and Spain (69%). Additionally, employees using their personal device for work expressed concern about their employer’s ability to access their private messages. In the US, 62% of workers were concerned about potential privacy issues, followed by 58% of employees in Spain and 48% in the UK.

In US workplaces, the most frequently used function on a mobile device is accessing email (37%). Whereas, in the UK (38%) and in Spain (51%) voice is the most regularly used function. Similarly, work email and office phone numbers were the most common contact information handed out by employees to external partners or customers across all surveyed countries. The UK was least likely to give their personal mobile number to external contacts, with only 12% claiming they would do so, compared to 26% in Spain and 23% in the US.
More about
Share this