A new Acunetix report on 5,500 companies comprising 15,000 website and network scans, performed on over 1.9 million files, finds nearly half of the web applications scanned contained a high security vulnerability such as XSS or SQL Injection, while almost 4 in 5 web applications were affected by a ‘medium security’ vulnerability. 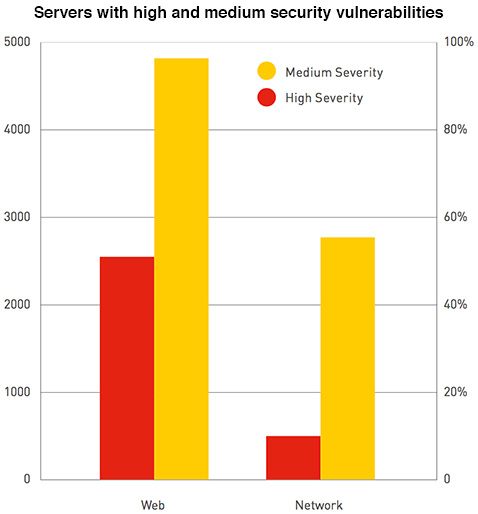 In today’s landscape, with high profile hacks and data breaches appearing in the media you might think these are the unlucky few – yet actually most companies are leaving themselves vulnerable to attacks. In the race to produce user-friendly interfaces and customer-centred apps, modern companies are leaving their (and our) precious data wide open to cyber criminals.

With nearly half of web apps containing a high security vulnerability, means that 50% of the organisations scanned would fail at complying with the financial industry’s PCI Data Security Standards.

Attackers continue to concentrate their efforts on web-based applications since they often have direct access to back-end data such as customer databases. The nature of cyber-attacks is also diversifying as criminals target not only financial data but personal data for use in identity theft and confidential intelligence to carry out cyber espionage.

When it comes to network vulnerabilities, administrators are performing better, however the stats are still not reassuring at all. 10% of the servers scanned were found to be vulnerable to high security risks, and 50% had a medium security vulnerability. Keeping in mind most of these servers are perimeter servers, having a network vulnerability on these internet-facing servers could spell disaster, as this could easily lead to server compromise and access to other servers on the network.

Having a high security vulnerability is a major problem and fixing these should be top of the web security list. To define high security: An attacker can easily exploit such vulnerabilities to compromise the integrity and availability of the target application, gain access to backend systems and databases, as well as deface the target site and trick users into phishing attacks.
More about
Share this