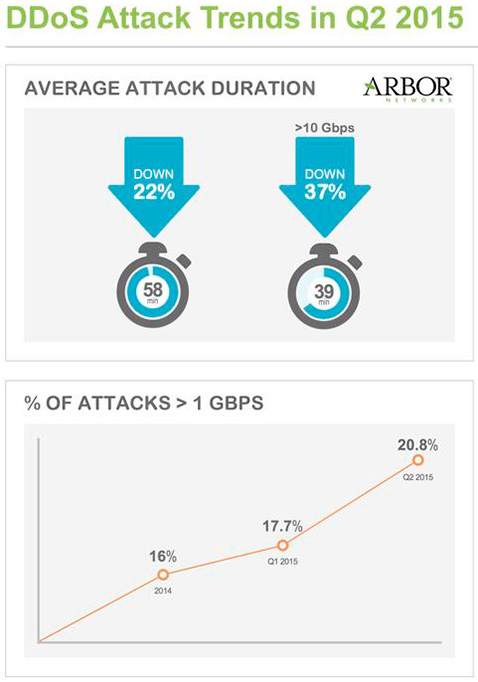 The largest attack monitored in Q2 was a 196GB/sec UDP flood, a large, but no longer uncommon attack size. Of most concern to enterprise networks is the growth in the average attack size.

In Q2, 21% of all attacks topped 1GB/sec, while the most growth was seen in the 2-10GB/sec range. However, there was also a significant spike in the number of attacks in the 50 – 100GB/sec range in June, mainly SYN Floods targeting destinations in the US and Canada.

“Extremely large attacks grab the headlines, but it is the increasing size of the average DDoS attack that is causing headaches for enterprise around the world,” said Arbor Networks Chief Security Technologist Darren Anstee. “Companies need to clearly define their business risk when it comes to DDoS. With average attacks capable of congesting the Internet connectivity of many businesses it is essential that the risks and costs of an attack are understood, and appropriate plans, services and solutions put in place.” 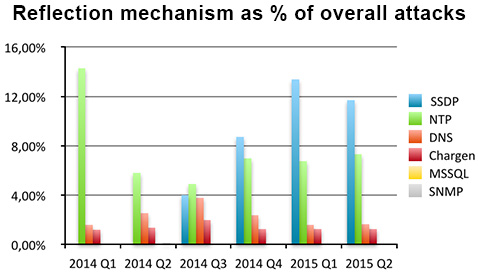 Reflection amplification is a technique that allows an attacker to both magnify the amount of traffic they can generate, and obfuscate the original sources of that attack traffic.

This technique relies on two unfortunate realities: firstly, many service providers still do not implement filters at the edge of their network to block traffic with a ‘forged’ (spoofed) source IP address; secondly, there are plenty of poorly configured and poorly protected devices on the Internet providing UDP services that offer an amplification factor between a query sent to them and the response which is generated.

The majority of very large volumetric attacks leverage a reflection amplification technique using the Network Time Protocol (NTP), Simple Service Discovery Protocol (SSDP) and DNS servers, with large numbers of significant attacks being detected all around the world.
More about
Share this