A ThreatTrack security survey of C-level executives at U.S. enterprises employing a CISO found that despite a rash of high-profile data breaches in the last year, many in the C-suite still fail to fully appreciate their CISO’s contributions and view them primarily as scapegoats in the event of a data breach.

“Last year, we were surprised that so many executives neither understood nor valued the role of their CISO, and viewed them as convenient scapegoats in the event of a headline-grabbing data breach,” said ThreatTrack President John Lyons. “This year, the data is stunning. With growing concerns about data breaches, organizations appreciate the need for cybersecurity leadership at the highest levels but have failed to make progress in empowering CISOs with the authority they need to successfully defend their organizations. In some areas, CISOs have lost ground.”

47% of executives agreed their “organization should make it a priority to ensure your board of directors includes at least one member with a strong background in cybersecurity, possibly including someone who is, or has served as, a CISO at another enterprise.” 33% even said they already had at least one member who meets those requirements. However, that does not translate into increased support for CISOs. Only 25% of respondents said “CISOs deserve a seat at the table and should be part of an organization’s senior leadership team.” 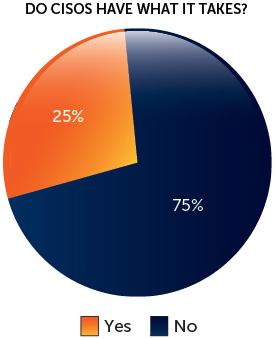 “These results pose a real dilemma for CISOs,” continued Lyons. “If CISOs don’t have visibility into operational plans and strategy, and aren’t included in decision-making processes, how can they be held responsible for a major security issue? The need for information security is keenly appreciated, but CISOs are struggling for the recognition and authority they need to be effective in defending organizations from today’s increasingly sophisticated and frequent cyber threats.”