Making things easier for users is generally a good idea, but sometimes complicating a process could lead to increased security, and should be the preferred option.

A blog post by Lookout Product Manager David Richardson has brought to my attention something that I wasn’t aware of: the process for sideloading apps in iOS 9 has been changed to make it less likely for tech unsavvy users to be hit by malware.

“Sideloading is the act of downloading an app to a device […] without going through the official App Store. Many people don’t realize it, but you can download apps via links or websites on iPhones and iPads as long as they are signed by an iOS enterprise developer certificate,” he explained, adding that while sideloading is a great way for enterprises to distribute homegrown apps, the process has also been misused in the past by attackers – they would buy enterprise certificates from the black market, and use them to sign malware.

The previous sideloading process went like this: when users clicked on a link in an email or on a website, the OS would first ask them to confirm the installation of the app, and then to confirm that they trust the app’s developer. As we know, most users happily click through dialogue boxes such as these without giving a second thought to security – they just want the boxes to go away and to be free to use the app.

But with iOS 9, the process is slowed down, requires the user to jump a few hoops, and allows them to mull over for a little bit if they want to really trust the app developer. The first question is the same as before – do you want to install the app? – but once the app is launched, the user is faced with a dialogue box that says that the app developer is not trusted on this device, and that until it is, the app will not be available for use.

This dialogue box offers no simple button to click in order for the device to trust the developer: 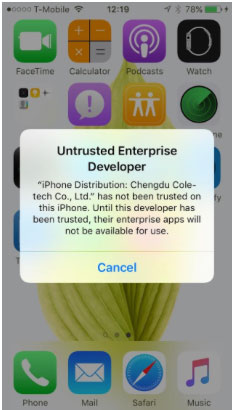 What the user needs to do is to go to the device’s Settings > General > Profiles, click on the developer’s certificate, then choose to trust it.

While enterprise users won’t have to go through this process every time an app is pushed onto their devices via the company’s Mobile Device Management, regular users will have to jump the hoop for every app they wish to install from a source that’s not the official App Store.

This will hopefully make them think twice about whether or not the can trust the app and its developer, and will also prevent inexperienced users from simply clicking through the process without thinking about it at all.
More about
Share this