In the first half of the year, the vast majority of the attacks that Corero protected its global customer base against were less than 1 Gbps.

Additionally, more than 95 percent of the attacks lasted 30 minutes or less. As attackers look for new ways to leverage DDoS attacks, they have realized that short duration sub-saturating attacks are more difficult to defeat, particularly in carrier or Service Provider network environments that leverage coarse sampling detection techniques and centralized scrubbing centers.

DDoS attacks in the first three months of 2015 remained relatively consistent from the previous quarter – averaging three attacks per day. The daily attack volume increased in the second quarter to an average of 4.5 attacks. The increasing use of DDoS attacks by malicious actors can be attributed to the ease in purchasing and launching DDoS attack tools, and the ability to leverage these attacks as part of a larger strategy.

“Attackers are continuing to leverage DDoS attacks as part of their cyber threat arsenal to either disrupt business operations or access sensitive corporate information, and they’re doing it in increasingly creative ways that circumvent traditional security solutions or nullify the previous effectiveness of scrubbing centers,” said Dave Larson, CTO and Vice President, Product, Corero Network Security. “In order to effectively protect their networks, prevent disruptions to customer operations, and better protect against data theft and financial loss, companies need real-time visibility and mitigation of all DDoS attack traffic targeting their networks, regardless of size or duration.” 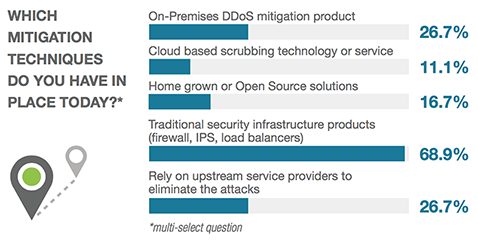 Corero also surveyed enterprises about DDoS mitigation strategies and the role that ISPs should play in defending against these attacks. The company found:
More about
Share this