Consumers often don’t realize that the applications they depend upon daily live in the cloud and therefore many may be unaware of the threat of breach to their personal data, according to Radware. Over two-thirds (67%) of Americans say they don’t currently use cloud-based applications. Meanwhile, cloud-based mobile apps continue to grow in popularity. 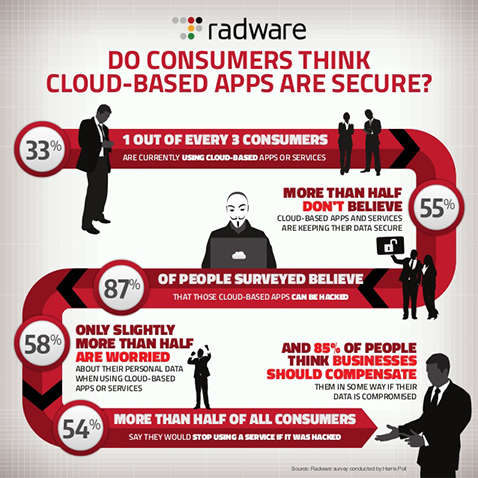 33% of consumers report using cloud-based apps or services; fitness apps (16%) seemed to be the most commonly used cloud-based apps; followed by food ordering services (10%); transportation and financial service apps (both 8%); and healthcare (7%).

While 87% of consumers say they believe cloud applications could be hacked; 58% of cloud based app/service users say they are worried about the security of their personal data should the service get hacked.

Today’s consumers are expecting more from their cloud-based services. For example, more than half (54%) of consumers who use cloud based apps/services said that they would stop using a cloud-based service if it was hacked. 85% of Americans expect the companies behind these cloud based apps/services to provide compensation or identity protection to those who affected for any loss or damages associated with a hack.

Head in the clouds: While one out of every 3 consumers (33%) currently use cloud-based apps or services, more than half of consumers (55%) do not believe these apps are keeping personal data secure.

Compensation as correction: An overwhelming majority (85%) of Americans say cloud-based app providers should offer compensation or identity theft protection to customers affected by a breach.

Market leaders: More than two-thirds (69%) of consumers believe that the more popular a cloud-based app is, the more likely it is to become a target for hackers than less popular ones.