As part of a major research effort, the National Cable & Telecommunications Association (NCTA) unveiled cumulative data from their online survey of more than 100,000 Americans about their use of, and relationship with, the Internet. One of the most significant findings of the research is that 52% of Americans expressed that they want the Internet to be more trustworthy. 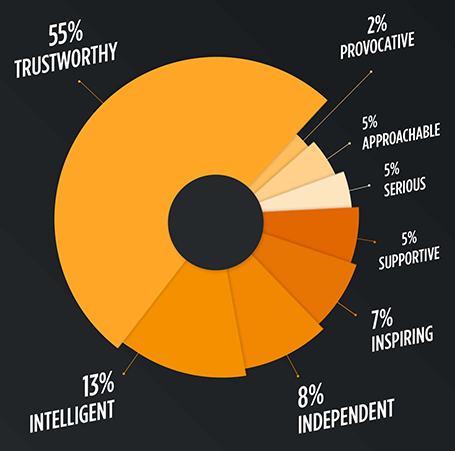 The crowd-sourced research is part of NCTA’s “Onward, Internet” project, a digital and social engagement effort to give Internet users a voice in how they want the Internet to evolve.

While the survey asks nine questions about the individual’s relationship with the Internet, the last question poses: “If I could only change one thing about the Internet, I’d want it to be more…” The respondents have a choice of one of eight answers. The answers most often chosen by the initial 100,000 respondents are: Trustworthy 52%; Intelligent 13%; Independent 8%; Inspiring 8%; Supportive: 6%; Serious 5%; Approachable 5%; and Provocative 3%.

In addition, there was mistrust coast to coast. When asked if they trust the answers the Internet provides, 36% of Californians said “no,” as well as 36% from New Jersey. This compared to only 23% from Montana who mistrust the Internet.

The survey results also showed that 15% of Millennials found the Internet daunting compared to 8% of older respondents (under 65), and a collective 13% of Americans feel intimidated by the Internet. Moreover, 57% of the respondents said they believe they can turn to the Internet for support and 38% believe it sparks inspiration.

Furthermore, 23% of the respondents in the Washington, DC region (DC, Maryland, Virginia) have trouble unplugging from the Internet, and 34% of Californians think the Internet provokes strong emotions.

“We embarked on this ambitious project to gain insights on Internet use and needs directly from Americans themselves,” said Michael Powell, president and CEO, NCTA. “Instead of surveying a few thousand consumers like many others do, we felt that a project of this sheer size and scope was a direct correlation to how the Internet has infiltrated our society and culture in so many positive ways. We hope these results can be examined by experts and consumers alike to provide a comprehensive take on how the Internet can evolve in the future.”
More about
Share this