What’s stronger than a speeding locomotive and can survive the heat of a fire? Data. The device that contains that data is a different story. 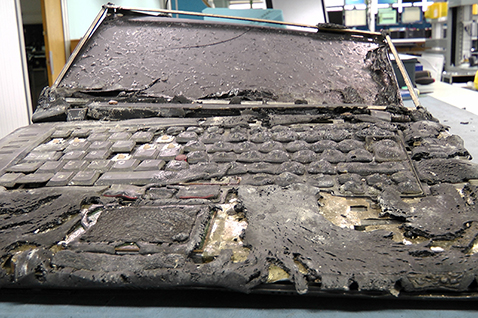 Each year, Kroll Ontrack – which performs over 40,000 data recovery jobs each year around the world – collects and publishes a list of the toughest physical and logical data losses from its global offices.

A small company was undergoing construction work throughout its offices, including its server room, when the company’s system administrator discovered one Friday that the plastic sheets used to protect the server room were not keeping the dust out. He decided to move the server to a different room away from the construction work for the weekend.

After a very hot and sunny weekend, he discovered Monday morning that his co-workers could not log on. The administrator soon realized another co-worker had switched off the air conditioning to the room where he had moved the server on Friday to prevent dust from getting in there, and the server severely overheated as a result.

We received a RAID server with 22 drives, which had already undergone data recovery from a previous data loss. The customer had re-used the “good” drives, replaced the bad drives and continued to use the server. The customer did not have a backup (again!), the server crashed (again!) and the drives were sent (again!) for the recovery of the data. The lesson? Never reuse a broken system without putting the necessary protections in place.

“I poured the solvent on my laptop. I’m on my way to your office,” said the voice on the phone. We soon learned that while preparing a custom paint color for his wife, which required mixing different paints with solvent to achieve the proper shade – our customer accidentally kicked the open solvent container straight onto a laptop on the floor, which was playing background music. It was a sad day for the laptop, but fortunately not for the data.

In a fit of frustration, a customer took her laptop and threw it with all her strength against a wall. The drive bounced off the wall and fell to the ground. Despite the 10-foot toss, the crack against the wall and the crashing decent to the floor, experts were able to recover all of the customer’s data.

In a play of very bad luck, a customer accidentally dropped his iPad from a train in the middle of remote woodland. Though amazingly recovered, the iPad was severely damaged and access to the data was compromised.

The digitizer was destroyed so the iPad did not respond to touch, while the second screen layer, comprised of the LCD, the chassis, the battery and the lightning connector, were all damaged. The electronics were also playing up, so that the iPad was rebooting itself every two minutes, giving the engineer only a few-seconds window to perform the recovery between the reboots. Despite these obstacles, engineers found that the motherboard was actually in a fairly good condition, facilitating the recovery of 100 percent of the data.