40 percent of all compliance officers surveyed believe their company’s bribery and corruption risks will increase in 2016, according to a new report by Kroll and the Ethisphere Institute.

One in four of those surveyed expressed no confidence in the ability of their company’s current controls to detect third party violations of anti-corruption laws. This is a high figure given the increasing number of third party relationships involved in business activities, as well as the large percentage of enforcement actions rooted in payments facilitated through third parties. 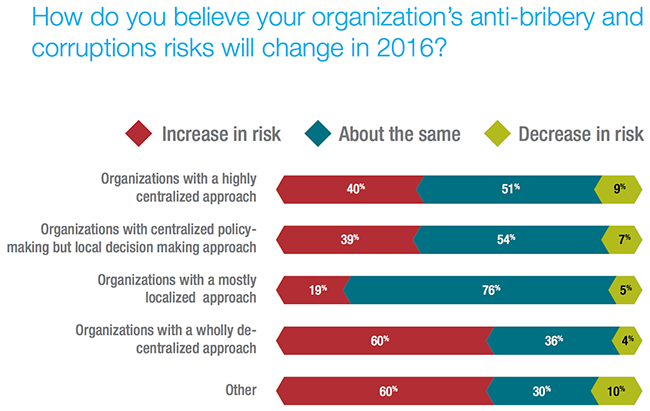 On a positive note, the degree of board and senior executive engagement regarding anti-bribery and corruption matters is increasing, with over half of respondents stating that their board of directors plays an active role in program development, and 48 percent saying the same of their CEO.

The data reveals that companies with engaged leadership teams are more likely to believe their bribery and corruption risks will remain the same or decrease in the coming year, and they display more confidence in their ability to handle risk.

M&A activity in 2015 reached a record US$3.8 trillion. Yet, over a quarter of survey respondents stated they do not have anti-corruption measures or programs in place for M&A or other corporate transaction targets.

“With global M&A, and in particular cross-border transactions, positioned to have another record year in 2016, it’s concerning that compliance professionals do not yet have a full seat at the table early enough in the transaction process to be able to exert meaningful influence in these critical business decisions,” said Lee Kirschbaum, President of Kroll Compliance.

The report also highlights that only one-third of respondents indicated that they are more concerned with personal liability than in prior years.

“After the release of the so-called ‘Yates Memo’ by the U.S. Department of Justice in September 2015, which expressed a renewed focus on holding individual corporate officers accountable, it is surprising that we are not seeing a higher level of executive-level concern in this area,” said Joe Spinelli, Senior Managing Director at Kroll.