We’ve long been moving toward cloud-based and virtualized infrastructures, but in some ways 2016 might just be the year in which the Software-Defined Data Center (SDDC) really becomes a fixture in corporate America, according to HyTrust.

There’s belief that optimal SDDC strategies and deployment can drive up virtualization ratios and server optimization. All this because even though data breaches will surely happen, concerns over security and compliance will be far less an obstacle. 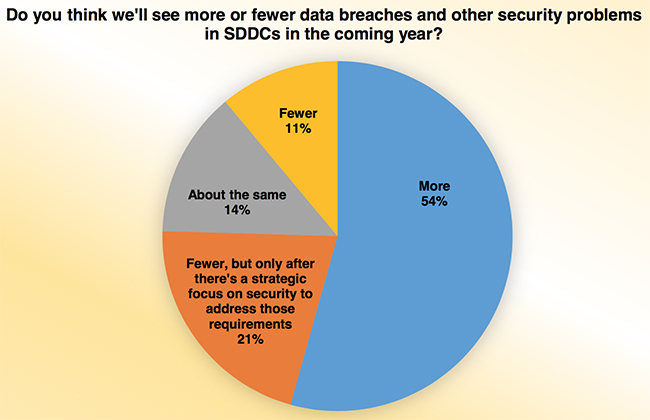 Looking at the big picture, the view is indeed positive: 65% of the respondents predict faster deployment in 2016, while 62% anticipate increased adoption. About 51% say they will see greater tangible benefits and a quantifiable ROI, such as enhanced efficiency, agility, flexibility and provisioning. 49%, see greater adoption of network virtualization, while even more, 53%, say the same about storage virtualization.

The view from the C-suite is particularly encouraging. Of the executives surveyed, the predictions are:

Some aspects of virtualization and the cloud that have in the past received less attention now seem to getting on the front burner as well. While 50% anticipate greater use of the public cloud, a strong 38% predict adoption for workloads traversing hybrid clouds, and nearly as many, 38%, tout the hyper-converged infrastructure. And on a particularly optimistic note, 41% now expect better alignment of security strategies specifically to address SDDC.

The issue of asset protection, not surprisingly, is more nuanced—many of the business and technology professionals surveyed harbor no illusions about the dangers involved, even as they voice more comfort with the overall environment.

Most importantly, about 70% of those asked say they believe security will be less of an obstacle to greater SDDC adoption by the end of 2016. However, no one thinks the problem will go away: 25% say security will still be an obstacle, and more than half, 54%, predict more breaches this year, whereas only 11% foresee less. Yet in a sign that awareness of potential solutions is rising, 21% say that there will be fewer breaches but only after corporations apply a strategic focus to the issue to address those requirements.

Perhaps not surprisingly (to insiders anyway), 71% expect to see more or about the same number of issues in the areas of internal compliance and auditing with cloud and SDDC deployments.

What might be most relevant in the area of security, however, is the apparent disconnect between high-ranking executives and those tasked with managing or engineering the network.

Interestingly, despite some discrepancies, the responses here are roughly similar between C-level executives and those at the VP and Director level. Professionals at the ‘manager’ level, however, seem to have some different views:

Taking the nuances further, there’s clearly a perception problem. More than half the respondents, 52%, identify the perception of inadequate security—along with the fear of lower security levels than are available in a physical data center—as the biggest security gap holding back SDDC deployment.

Technology isn’t seen as an ideal answer just yet: 44% decry the lack of solutions from current vendors, the immaturity of vendors or new vendor offerings, or issues with cross-platform interoperability. While the numbers here are somewhat similar across the different groups, there are some interesting discrepancies.

For example, among C-level executives, the perception of inadequate security comes in at 37%; among system administrators, who presumably are most familiar with the technologies involved, it’s 54%.

The issue of perception also extends to overall concerns most likely to slow down migration to a software-defined data center.

Despite the mainly sunny prognostications, there’s no lack of denial regarding ongoing concerns. When asked to identify the No.1 issue that that keeps organizations from virtualizing all applications, including those seen as mission-critical, security concerns rank first at 45.6%. Budget restraints come second but far behind at 20%, while performance concerns at register with15.4%.

Other worries go all over the map—operational or process challenges, architectural constraints, and even a lack of understanding by management regarding the potential benefits. For the record, SMBs are twice as concerned about security as large enterprises (50%), who view security (30%) and performance (30%) with equal concern.

There’s also an interesting disparity in answers here based on job title, and it offers a revealing look at corporate priorities. For example, fully 60% of those in the IT Systems Administrator/Engineer category cite security as their top concern. Executives at the VP/EVP/SVP level are somewhat similar, with 51.2% agreeing.

Among those in the C-suite, meanwhile, security gets the nod from only 36%, not far above budget restraints at 28%. Curiously, this distinction is even sharper in the Director category—budget officially takes the top spot at 30%.