Let’s Encrypt, the non-profit Certificate Authority (CA) backed by the Electronic Frontier Foundation, Mozilla, Cisco, Akamai, and others, is ready to be considered a stable offering.

The CA’s goal – “to encrypt 100% of the Web” – is still far off, but the number of issued certificates has risen steeply since the CA’s inception: 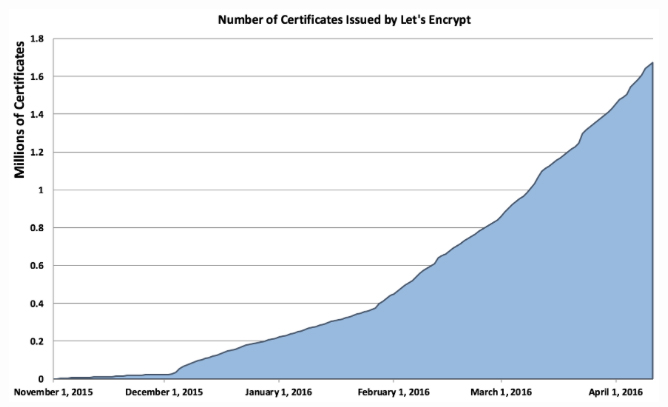 Aas also announced that the CA’s founding sponsors Cisco and Akamai have renewed their sponsorships, and Gemalto, HP Enterprise, Fastly, Duda and ReliableSite.net have also joined the considerably long list of sponsors.

Let’s Encrypt CA automatically issues and manages free certificates for any website that needs them, and simplifies the process of switching from HTTP to HTTPS so that site admins need not waste much time on it.

Only two days ago Automattic announced that they have partnered with Let’s Encrypt to get free SSL certificates for the million-plus custom domains hosted on WordPress.com.

The CA has demonstrated its wish to gain the users’ trust by hiring outside experts to conduct a security review of its software and the protocol it uses for automatic certificate issuance and management, and by issuing its first transparency report even before issuing its first certificate.