Organizations that invest in detection and response technologies, rather than perimeter-based solutions, are better poised to defend against cyber incidents. 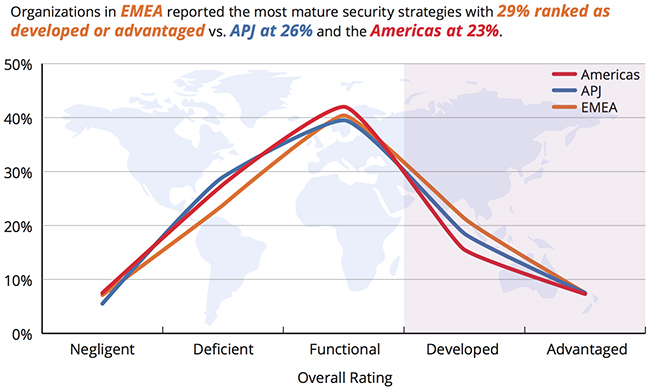 The second annual RSA Cybersecurity Poverty Index, which compiles survey results from 878 respondents across 81 countries and more than 24 industries, attracted more than double the number of respondents as last year, and gave participants the chance to self-assess the maturity of their cybersecurity programs leveraging the NIST Cybersecurity Framework (CSF) as the measuring stick.

The report found that for the second year in a row, 75% of survey respondents have a significant cybersecurity risk exposure. Incident Response (IR) capabilities are particularly underdeveloped. Nearly half of organizations characterized essential IR capabilities as “ad hoc” or “non-existent”, but organizations are more likely to accelerate programs to shore up cybersecurity capabilities once they have experienced a security incident that impacted the business.

The survey also showed that most organizations continue to struggle to improve cybersecurity because they don’t understand how cyber risk can impact their operations.

There has been plenty of anecdotal evidence that companies tend to delay investments in cybersecurity until they experience the pain first hand. In addition, companies which primarily rely on a perimeter defense philosophy are disadvantaged in finding malicious activity, and risk public exposure of critical business assets. The results of the report solidified this concept, reporting that the organizations that detect and experience frequent security incidents are 65% more likely to have developed or advantaged capabilities. This shows that organizations that regularly deal with security incidents accelerate moves to shore up security programs and end up with more mature capabilities.

Organizations must focus on executing preventative strategies and make improving this a priority over other capabilities which are growing in importance such as detection and response.

One of the most significant changes from the 2015 survey was the increase in the number of organizations with mature cybersecurity programs. The percentage of organizations reporting advantaged capabilities – the highest category – increased by more than half over the prior Index, from 4.9% to 7.4%. But organizations’ overall perception of their cybersecurity preparedness continued to lag. The number of respondents reporting significant cybersecurity risk exposure stayed steady at nearly 75%, reflecting a growing disparity between the “haves and have-nots” in security preparedness.

The survey also showed that organizations continue to struggle with their ability to take proactive steps to improve their cybersecurity and risk posture. Overall, 45% of those surveyed described their ability to catalog, assess and mitigate cyber risk as “non-existent,” or “ad hoc” and only 24% reported that they are mature in this domain. The inability to quantify their Cyber Risk Appetite (the risks they face and the potential impacts on their organizations) makes it difficult to prioritize mitigation and investment, a foundational activity for any organization looking to improve their security and risk posture.

For the second year, the survey results highlight how critical infrastructure operators, the original target audience for the CSF, need to make significant steps forward in their current levels of maturity. Government and energy organizations ranked lowest across industries in the survey, with only 18% of respondents ranking as developed or advantaged.

Organizations in the aerospace and defense industry reported by far the highest level of maturity with 39% of respondents having developed or advantaged capabilities. Financial Services organizations, a sector often cited as industry-leading due to the large volume of cyberattacks it faces, placed in between with 26% rating their firms as well prepared – down from 33% a year ago.