Some 84 percent of information technology executives at firms that had not faced ransom attacks said they would never pay a ransom. But among firms that had been attacked, 43 percent paid.

Radware polled more than 200 IT executives across the US and UK The study found that US companies were far more willing to admit that they would pay a ransom. Among US firms who had not been attacked, 23 percent indicated they were prepared to pay a ransom, in contrast to the 9 percent in the UK. 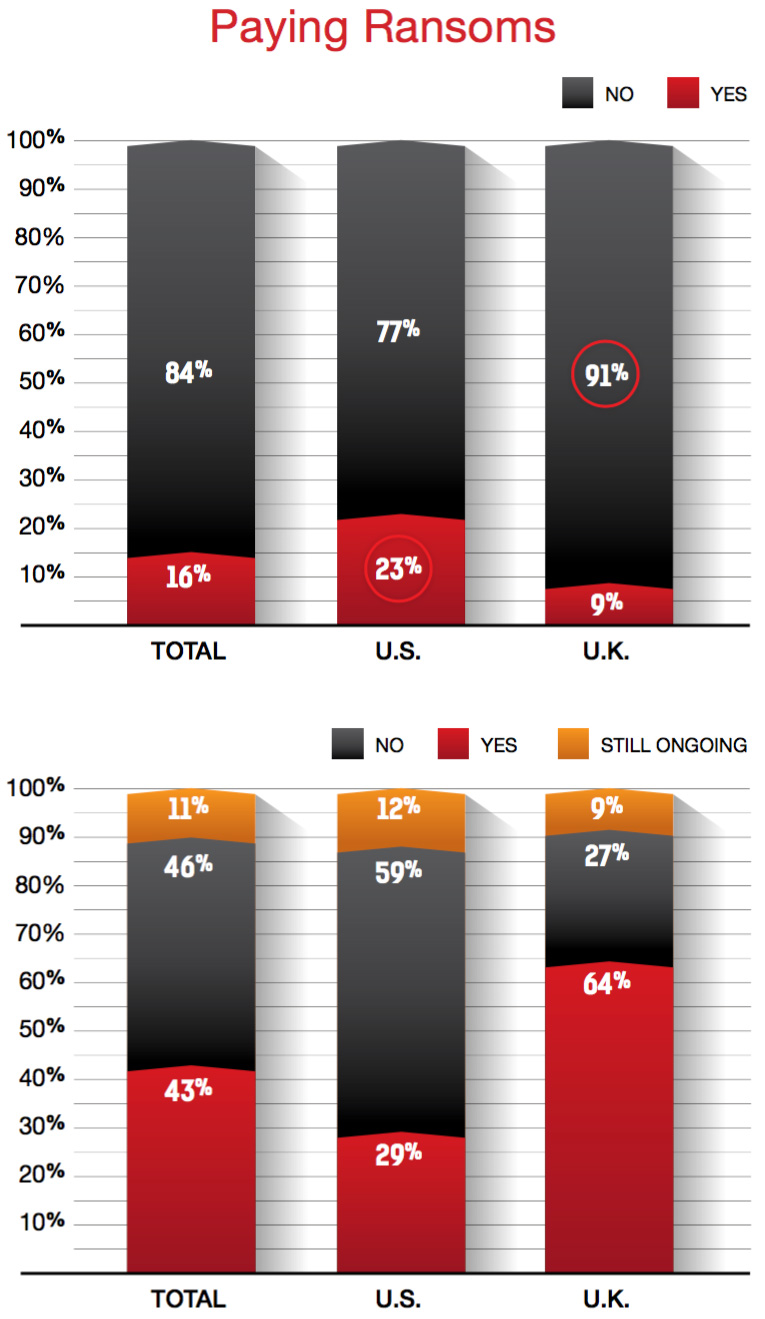 “This is a harbinger of the challenging decisions IT executives will face in the security arena,” said Carl Herberger, Radware’s Vice President of Security Solutions. “It’s easy to say you won’t pay a ransom until your system is actually locked down and inaccessible. Organizations that take proactive security measures, however, reduce the chance that they’ll have to make that choice.”

Senior executives see former bad guys as the best way to test their systems. Some 59 percent of respondents said they either had hired ex-hackers to help with security or were willing to do so, with one respondent saying, “Nothing beats a poacher turned gamekeeper.”

Work-from-home arrangements are seen as an increasing risk. The survey found a big jump in changes to telecommuting policies, with 41 percent of respondents saying they have tightened work-from-home security policies in the last two years.

While about one in three companies implemented security policies around wearables in the last two years, 41 percent said they still have no rules in place, leaving a growing number of end points potentially vulnerable. Perhaps this is because wearables aren’t seen as a major target—only 18 percent pointed to wearables when asked what hackers would most likely go after in the next three to five years.

New connected devices will be the next security frontier

While wearables were less of a concern, many executives surveyed think the Internet of Things (IoT) could become a bona fide security problem. Some 29 percent said IoT devices were extremely likely to be top avenues for attacks, similar to the percentage of nods received for network infrastructure, which received 31 percent.

Cleaning up after a cyberattack can be expensive

Whether motivated by ransomware or another factor, attacks impose significant reputational and operational costs on victims. When executives named the top two risks they face from cyberattacks, brand reputation loss led the pack, with 34 percent of respondents choosing that as a big fear. Operational loss (31 percent), revenue loss (30 percent), productivity loss (24 percent), and share price value (18 percent) were also included in the top concerns.