Geofeedia, a US-based company that offers its social media aggregation platform “to a broad range of private and public sector clients”, also numbers among its clients over 500 law enforcement and public safety agencies across the country. 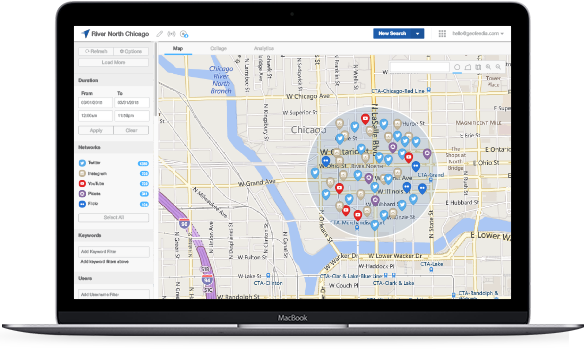 Until a month ago, the company’s name was unknown to most US citizens. But with the publication of a Daily Dot article and, most recently, of a post by the American Civil Liberties Union (ACLU), the wider public became acquainted with it and the fact that their platform is being used by law enforcement agencies to monitor protesters and activists.

The tool allows the agencies to monitor, in real-time, posts, photos, and live broadcast on Facebook, Twitter, Instagram, Vine and other social media sites, and to sort them by location.

But while this type of insight is welcome by both law enforcement and the public in situations such as natural disasters, mass shootings and similar events, civil liberties advocates are worried that these tools are being misused to disrupt (legal) protests, and can possibly be used to create dossiers on protesters.

“In the U.S. we’ve never had a secret police that circulates around civil society just looking for anybody saying anything suspicious. We shouldn’t have an online equivalent either,” Jay Stanley, a senior policy analyst at the ACLU, commented for the Daily Dot.

He also pointed out that the use of this type of tools can also make citizens refrain from exercising their First Amendment rights (such as freedom of speech and assembly).

In the wake of these revelations, the ACLU has asked social networks that provide Geofeedia with access required for their tool to work to revoke it, and Facebook did so by terminating their access to the Topic Feed API (Facebook) and the Instagram API on September 19.

It’s definitely a good first step, but Geofeedia is not the only one providing a tool with these capabilities to law enforcement.

That’s why the ACLU has publicly asked all social media companies to:

In the wake of ACLU’s post, Geofeedia issued a comment noting that they have in place clear policies and guidelines to prevent the inappropriate use of their software as well as “protections related to free speech and ensuring that end-users do not seek to inappropriately identify individuals based on race, ethnicity, religious, sexual orientation or political beliefs, among other factors.”

“That said, we understand, given the ever-changing nature of digital technology, that we must continue to work to build on these critical protections of civil rights,” they added.