Vendor revenue from sales of infrastructure products (server, storage, and Ethernet switch) for cloud IT, including public and private cloud, grew by 8.1% year over year to $8.4 billion in the third quarter of 2016 (3Q16), according to IDC. Ethernet switch continues to be the growth leader, as the market awaits new hyperscale datacenter builds to spur additional growth. 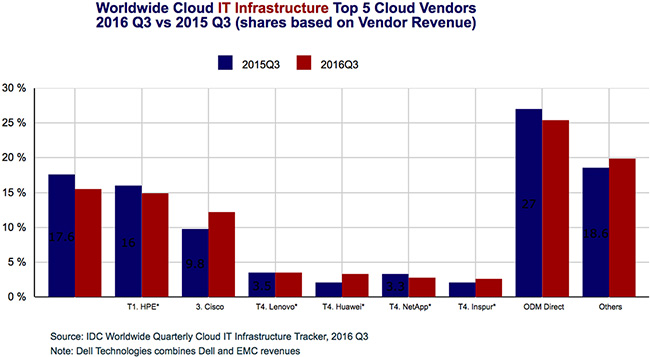 “New cloud datacenters have begun to launch, but in the third quarter the effect on the cloud IT infrastructure market was minimal,” said Kuba Stolarski, research director for Computing Platforms at IDC. “As network upgrades continue to prop up cloud growth overall, the hyperscale cloud datacenters are coming and they will drive new server and storage deployments over the next few quarters. Recently, there has been renewed strength in emerging markets and among smaller cloud service providers. As OpenStack has become easier to implement and maintain by a growing population of capable system administrators, private cloud options are becoming more viable in an increasing set of use cases and with a wider set of deployment parameters.”